Multitools have been around for a long time and even before Tim Leatherman came out with original PST the multitool had a purpose; it was a pocket tool box. For years companies have made multitools a jack of all trades and cram as much as they could into a tool so someone didn't have to go back to the tool box unless they really needed too. That's the reason we love multitools, they are our constant companion that can tackle any task.

Things have changed over the past few years and there is a trend developing to meet a niche or demand in the tool market. Companies are releasing minimalist style tools that feature a basic set of tools and leaving out stuff that they feel a person would not use on a daily basis. I'm not sure if the design changes are because of culture or city/urban life but they they seem to be a hit with people concerned with needing a multitool no matter what their profession. 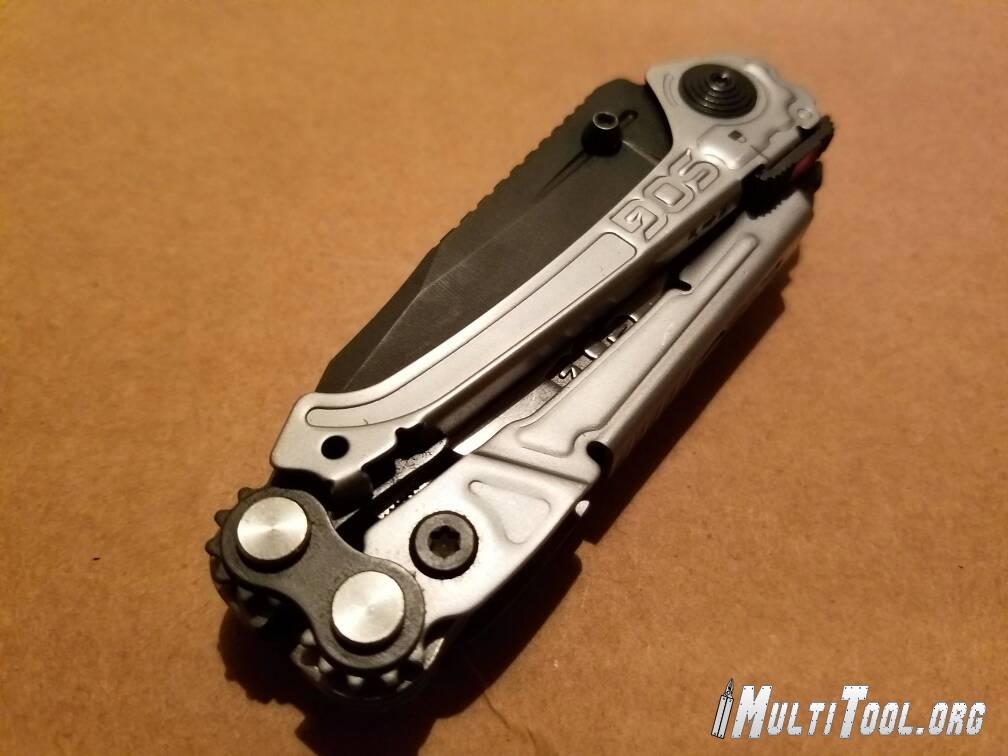 The SOG Reactor takes many design cues from the the Leatherman Skeletool and the Gerber Crucial. The tool features a pair of pliers, phillips and flat drivers as well as a knife. These simple features are what most people need on a daily basis and leaves out what people don't use. 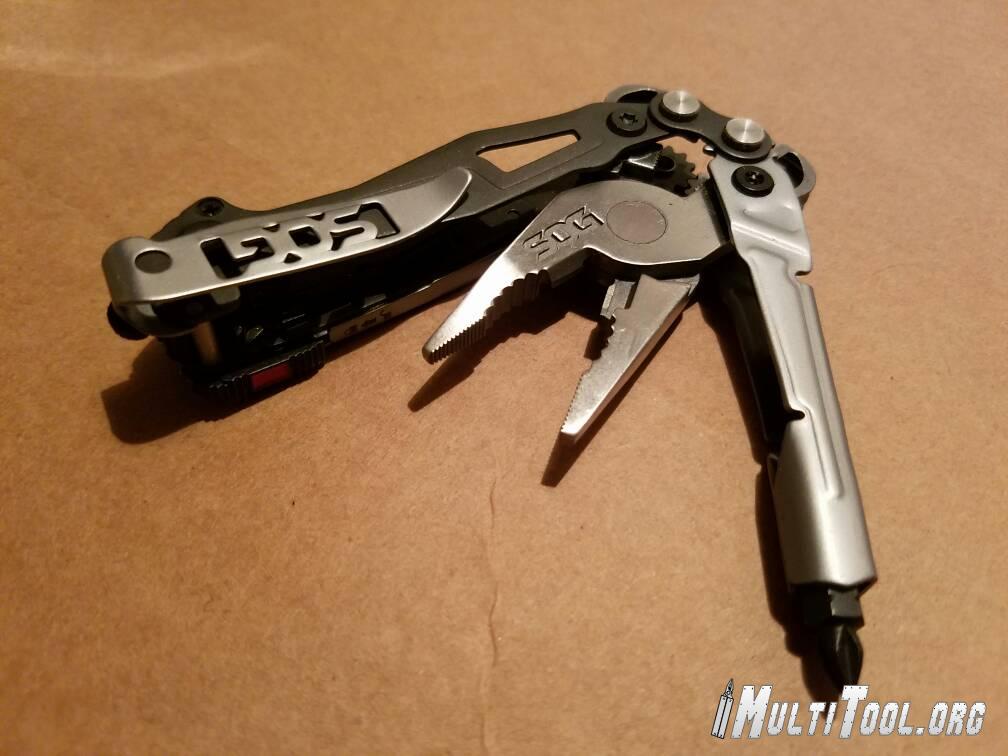 The pliers on the Reactor are SOG's patented "compound leverage" design and the idea behind them is; what ever pressure you exert on the handle doubles and this pressure transfers to the plier head. This is accomplished by a gear system and pivot points on the tool. Using leverage and those point SOG has made a plier design that grips better than standard pliers. The overall design of the plier head is standard SOG, robust at the pivot and tapered nicely at the tip. The wire cutters work extremely well thanks to that compound leverage I spoke about. It's nice to see they have incorporated a hard wire notch for such a small and light duty tool. Another feature I like which is new to SOG's pliers are the addition of a crimping area. Some plier head designs feature a dedicated crimper area in the needle nose portion of the pliers but SOG has placed them in the rear of the head where the handles meet. 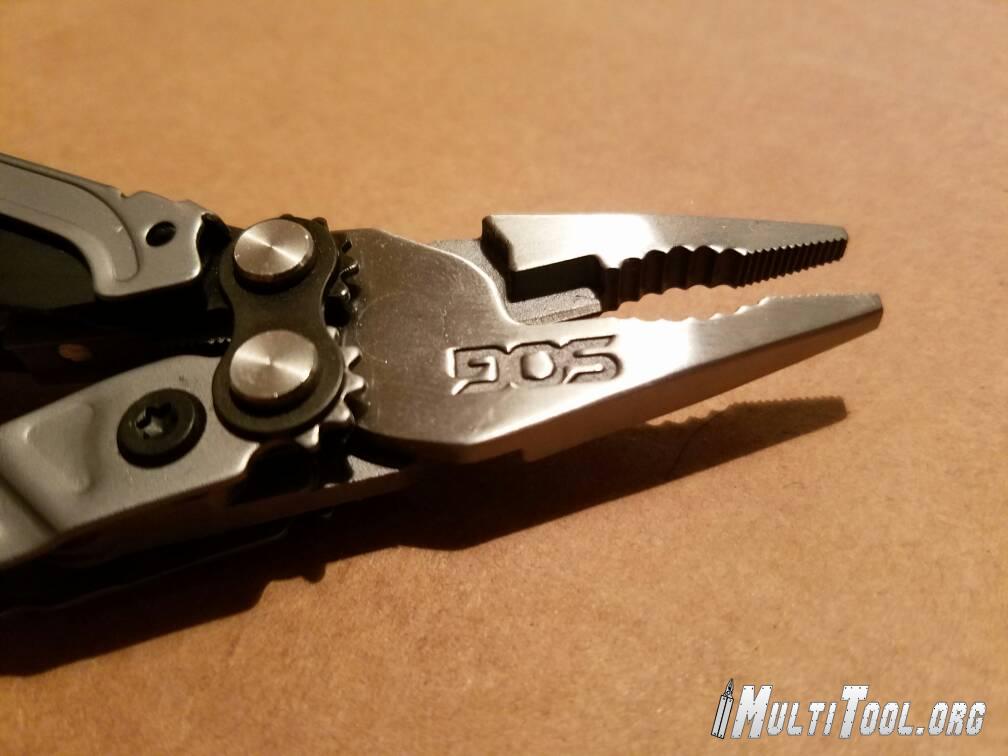 The screw driver system is a new style that SOG has introduced to their 2016 lineup. Typically SOG's screw drivers are like a standard multitool where the drivers are tucked into the handles and folded away when not in use. For SOG's new tools they have incorporated a bit driver into the rear end of the plier head. The tool has a double ended bit that is kept in the end of one of the handles and is merely there for storage purposes. The handle looks like it's meant to drive screws this way but it's not designed to do that, I'm fact SOG states in the manual that you'll void your warranty by trying to do so. The bit is held in the plier handle via a small retention spring, to remove the bit simple pull from the end of the handle. When you want to use a bit you insert it into the end of the tool where SOG has added a magnetic driver. This design allows the bits to be rotated along a central axis and give you a feeling similar to a regular screwdriver. The problem I have with the implementation of the driver system on this tool is the tool does not hold the bit securely in place unless a significant amount of pressure is applied to the handles. The magnet driver has too much room and the handles cannot close anymore to apply more pressure to the bit. The end result is the bit spins if you don't really grip the handles tightly. Overall I think the idea is great but execution on the Reactor leaves me wanting more. 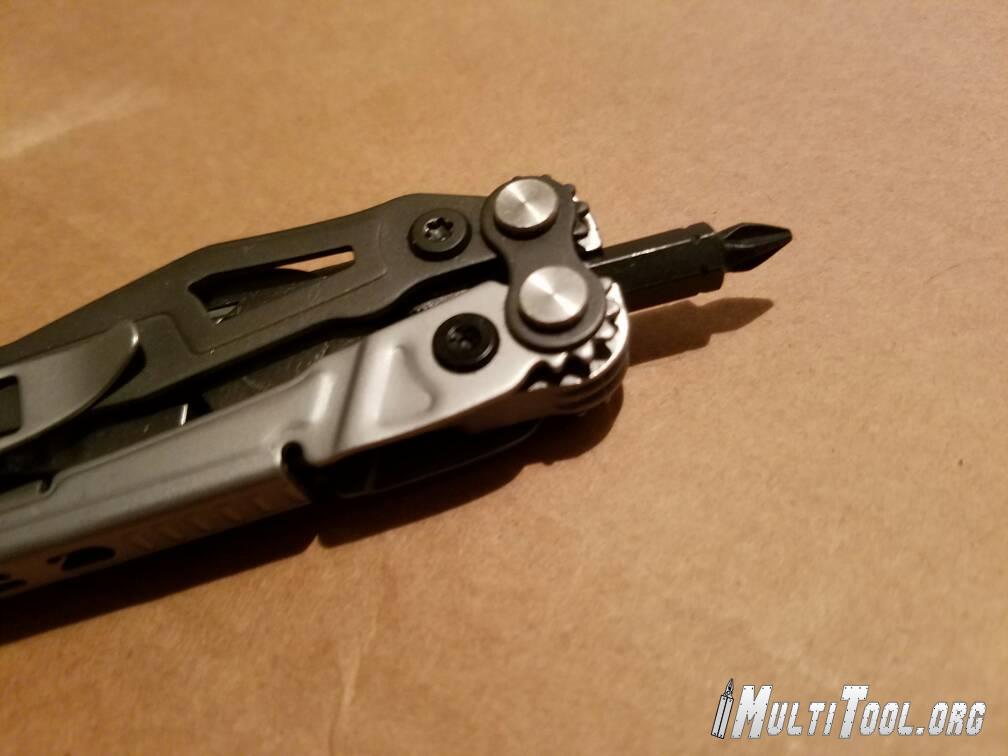 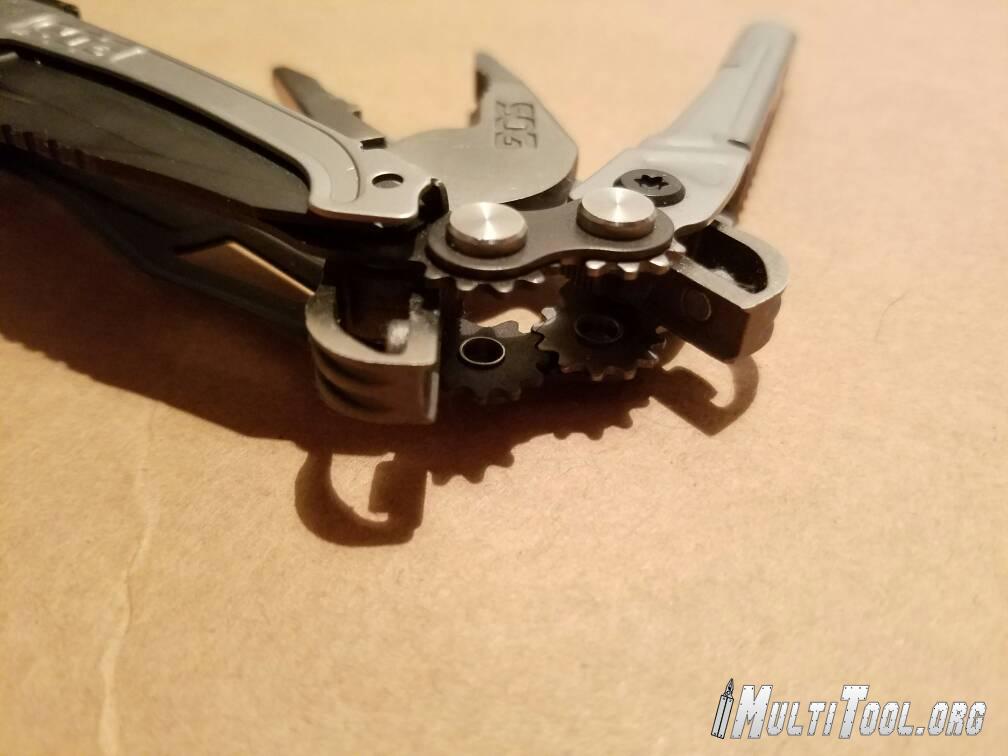 The blade on the Reactor is 2.5 inches and is hard cased 8Cr13MoV. This steel isn't high end by any means but similar to 420 stainless. The blade shape to me is like a reverse tanto style and came razor sharp. The blade opens up via a thumb stud and has SOG SAT assisted spring system in it. Simply flick the thumb stud and the blade comes flying out. Opening the blade is slightly different than a typical knife. Most knives I flick the thumb stud towards the front of the knife. With the Reactor I have to have a good grip on the knife and flick out to the side. The SAT kicks in and does the rest of the work for you. The blade in spite of its size has worked really well am fond handled what I've used it for. Having the spring assist, it's nice SOG also included a safety lock for those people who are afraid of the blade accidently opening in their pocket. 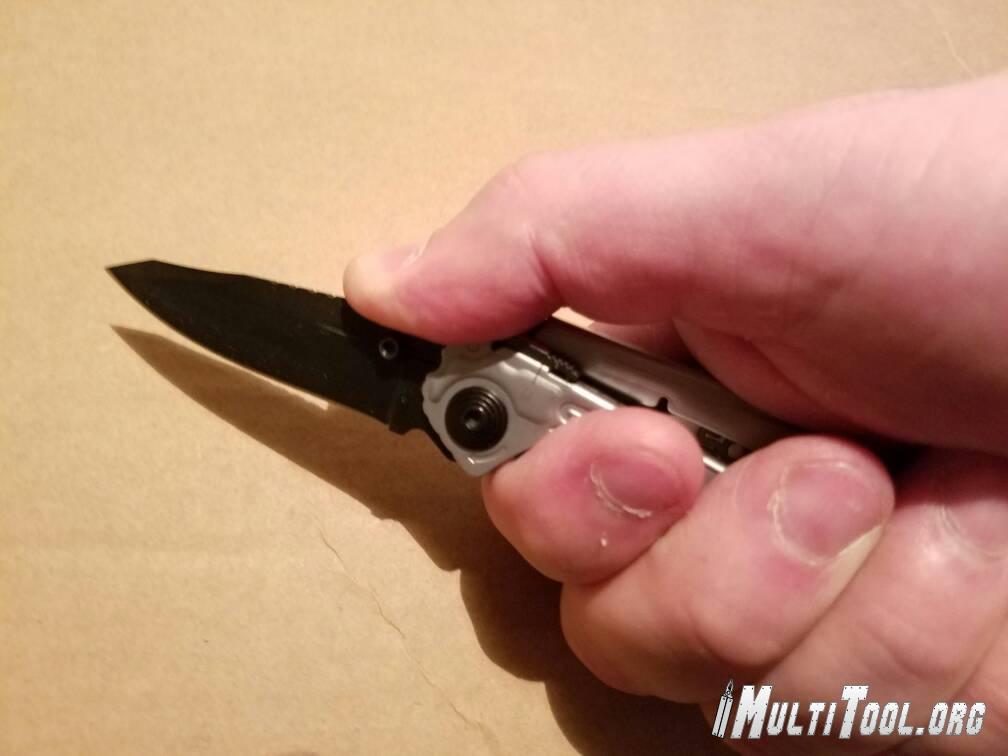 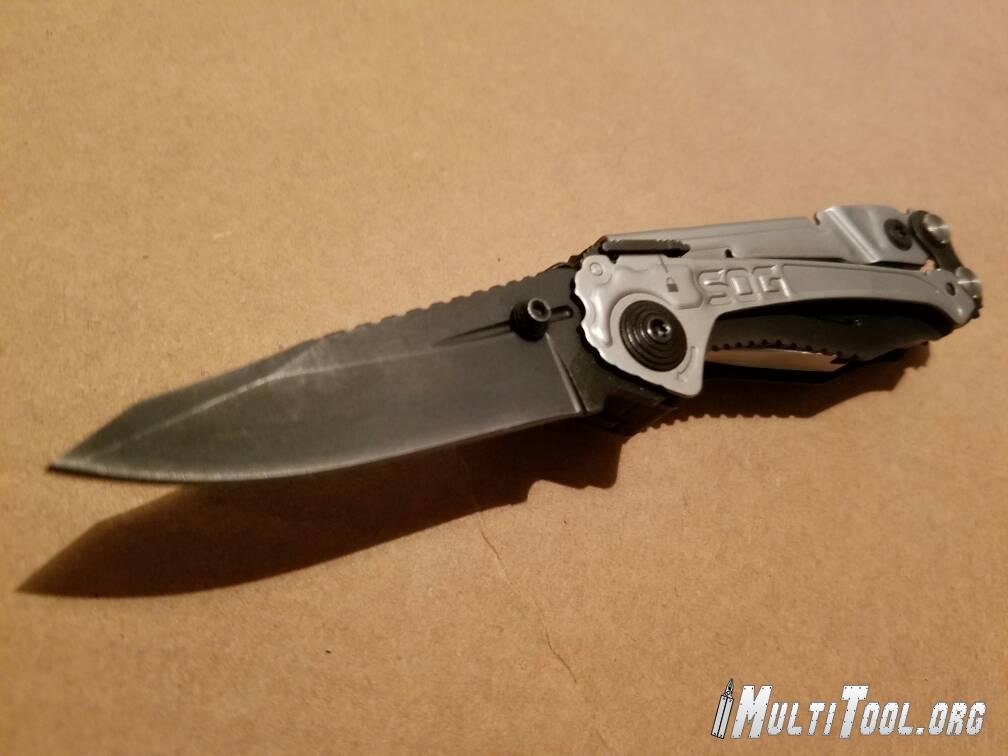 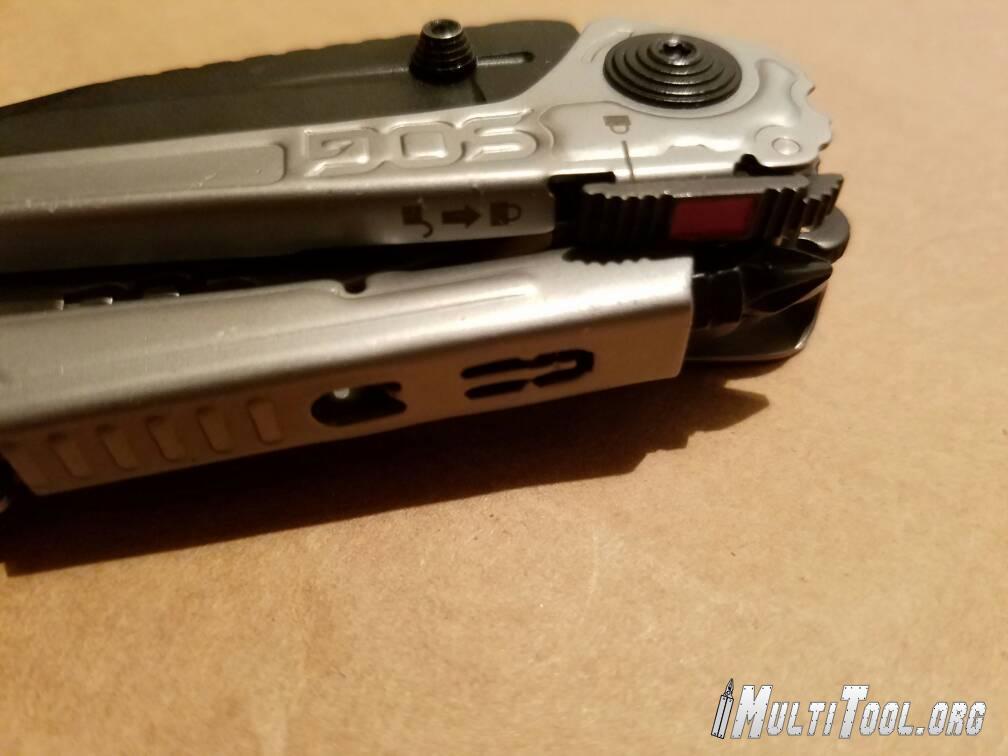 Last thing I'll touch base on is the handle design and pocket clip. The handles in the open position with the pliers out resembles the other paired down tools from Gerber and Leatherman. The tool has one hande that is bigger than the other; one houses the blade and the spring assisted mechanism and the other for the bit retention. This results in a lop sided or asymmetrical design that makes it very difficult to use the tool in all but one way. I have to use it so the knife handle is in my palm and the driver end gets actuated with my hand. This motion doesn't feel very organic and the pliers are off at an angle rather than straight ahead due to the design. In reality this is no different than other slimmed down designs where one side is larger than the other. I don't see it causing any issues and having the compound leverage makes up for the oddness.

The tool also features a very deep pockets clip where the tool is carried in a tip down position. When operating a blade I prefer tip up for easier release but this design works just as well as other models. I love how the clip rides deep in my pocket, I don't ever worry about the tool coming out or needing to be rechecked and make sure it's where it needs to be. Like other SOG designs the companies branding is on the side and let's everyone know what brand of tool your carrying. The clip is nice in the respect it doesn't appear your carrying a tool or pocket knife and will keep some of your coworkers from questioning your gear. 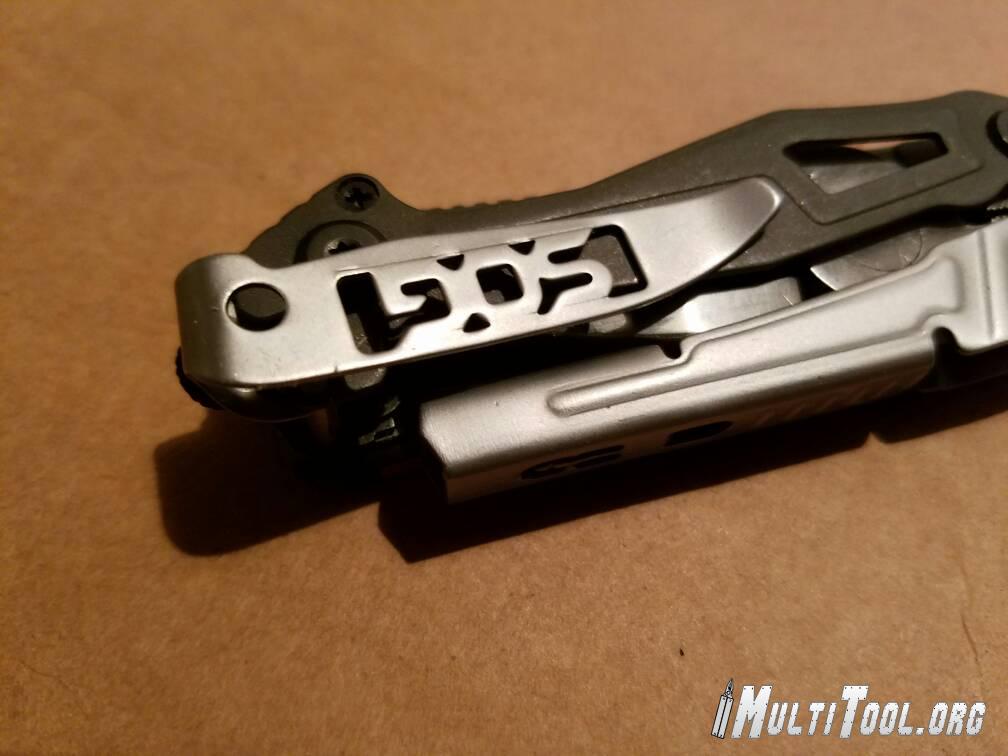 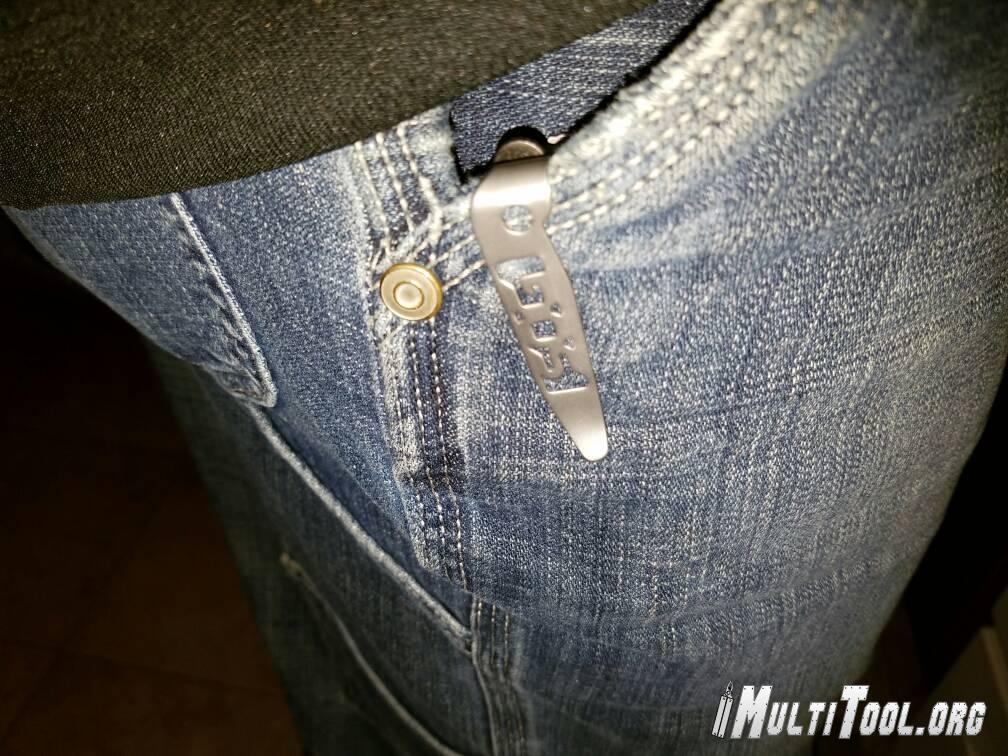 The SOG Reactor is another great addition to the newer genre of tools in the market place. It hold decent against its counterparts and if your a SOG guy this tool may be what your looking for
It may not solve every situation your in but the right tool for the job is often the one you have at the time.

More in this category: « SOG Crosscut 2.0 Review
back to top
Interested in this or a different tool and still have more questions?
Why not join us over on the Multitool.org Forum where our community can help you find what you're looking for!