Like many other folks, my first thoughts on the new CRKT Eat'n Tool were less than serious, and I wondered how any real multitool enthusiast or user would make use of this tool. After carrying and using this tool I realized I was looking at this tool all wrong- it's not an Every Day Carry (EDC) type tool, it's a specialized tool for a camper or hiker who wants a lightweight spork with some extra functionality for maintaining equipment. For the type of user who really cares about weight, the Eat'n Tool might just be the ticket. 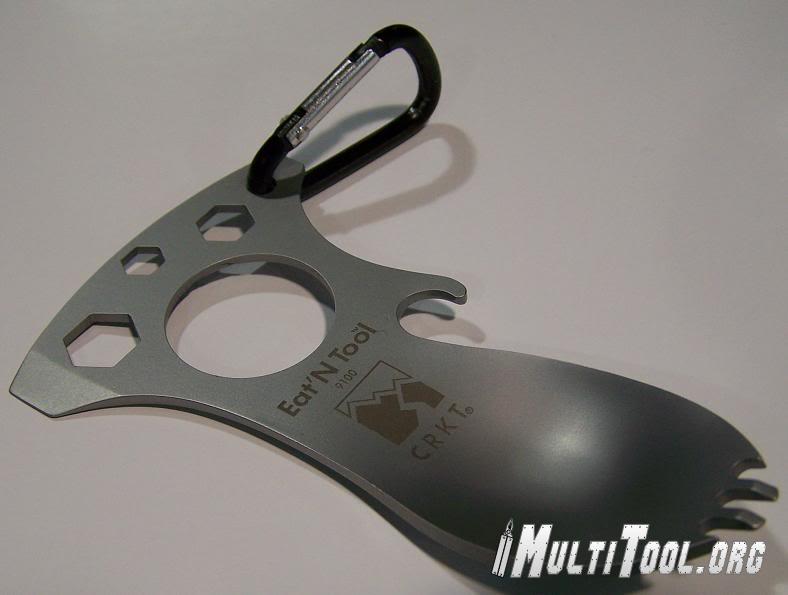 When you boil the Eat'n Tool down, it's basically a spork with a few extra cutouts that allow for other functions. The spork area is significantly sized for a decent mouthful of stew and the tines are just long enough to spear a good sized hunk of potato or steak, but I'd like the tines to be a little less pointy and perhaps a little longer. The tines as they are don't hold the food morsels as securely as I'd like, although my dogs sure appreciate it! The spoon could also be a bit deeper, but all in all it functions well enough and I have no serious complaints. 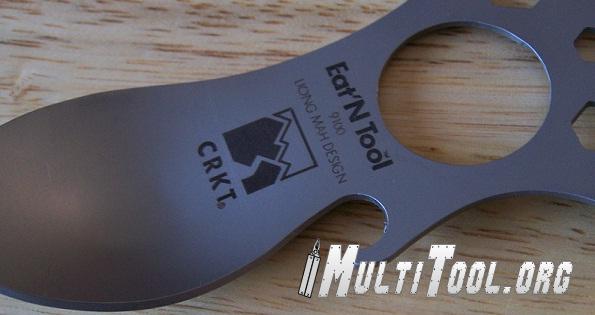 Also built into the Eat'n Tool is a bottle opener, a flathead screwdriver and three hexagonal wrench cutouts, although it surprises me that none are standard 1/4” sized which could have come in handy for use with 1/4” screwdriver bits. I can only assume that the three cutouts are sized for fitting hiking equipment that I don't personally have. This shouldn't be considered a serious drawback though, as I am not a hiker due to a bad foot and some arthritis, not because the equipment it is meant to be used on is obscure. I will be sure to try it on the various components of my Coleman stove. 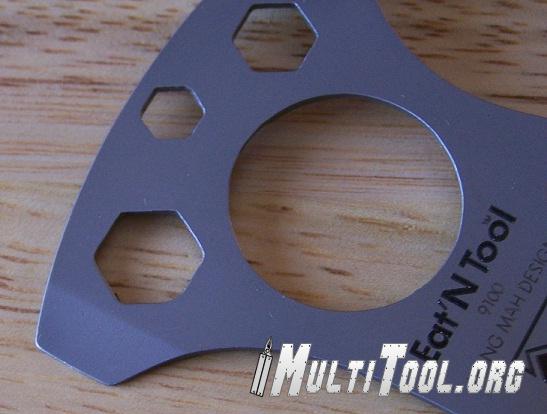 The bottle opener recieved some extensive testing since it arrived, and seems more than adequate, even when the bottles start to get a little blurry! The substantial sized handle offers a significant amount of leverage for prying off a cap. I could however see some potential for increasing it's functionality by sharpening the inside for a guthook/strap cutter that could also open prepackaged food items, or a protruding cutter blade so it could double as a can opener. However, the bottle opener opens bottles well, and that's really all you really need from a bottle opener! 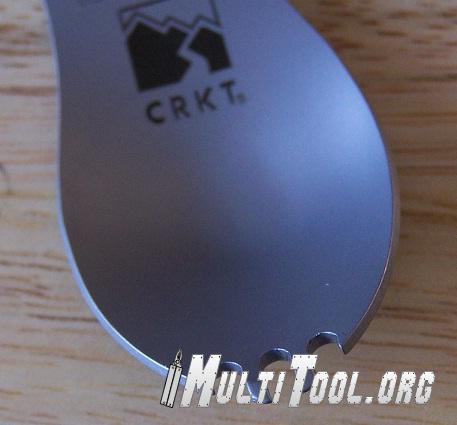 Lastly we come to the screwdriver, which functions about as well as any other flathead- it's really hard to screw one of those up, and designer Liong Mah wisely decided not to get fancy with it. The nice thing about it is that it's oriented at approximately 90 degrees to the rest of the tool so it can be used safely with a significant amount of torque, however it doesn't have any reach, so expect to only use it on surface mounted screws- it won't reach anything recessed more than about a quarter of an inch. 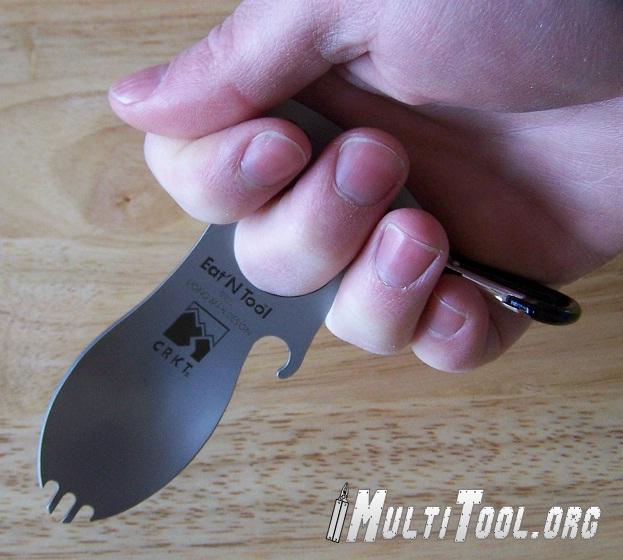 There have been rumors about the Eat'n Tool being used as a self defense weapon, although there is no documentation at all from Columbia River to support this. It isn't mentioned as a potentially defensive weapon anywhere in the catalogue or on the CRKT Website, however almost everyone who has heard of the Eat'N Tool seems to be under the impression that they'd seen or heard about this possibility somewhere, and everyone has an opinion on how effective it would be. Originally, the custom version designed by Liong Mah and produced by Sal Merino was supposed to be available as a last ditch weapon for women. In my opinion, for what it's worth, I'd say that if you are in a situation that calls for a defensive weapon, the Eat'N Tool could be used, in as much as anything else could be- a pocket knife, climbing spikes, flashlight, keys or any other item. If for some reason you are silly enough to go looking for a fight, I suggest you look for something else though, as this is hardly an optimal weapon. 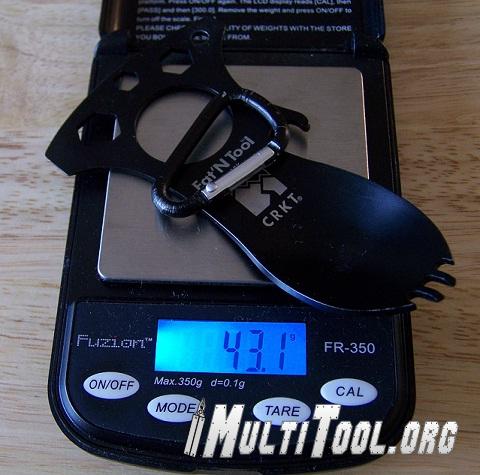 The bottom line on this tool is this- The Eat'N Tool is a must for any backpacker, hiker or camper who plans on eating outside of a restaurant or dining room. It's inexpensive and functional. Many people carry a spork when venturing outdoors because at some point, everyone needs to eat, so why not have one that fulfills other needs as well- especially if you are very weight conscious on your outings. The Eat'N Tool may just save you having to carry a multitool as well, provided it's options fit your other gear. 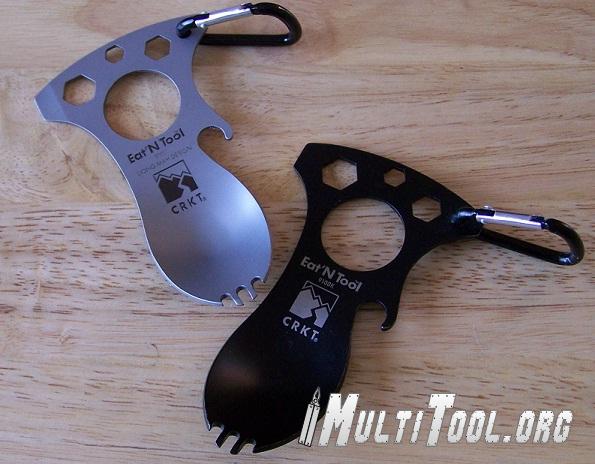 More in this category: « CRKT Flux Review CRKT Spare Tool by R. Tabor Review »
back to top
Interested in this or a different tool and still have more questions?
Why not join us over on the Multitool.org Forum where our community can help you find what you're looking for!