Anyone who reads my reviews or ramblings on the forums knows that I have a fascination with rescue oriented tools. With all the traveling and security work I do, and have done over the years, I have witnessed more accidents than tactical knife-y situations, and I like tools that are oriented to helping victims rather than slaughtering ninjas. 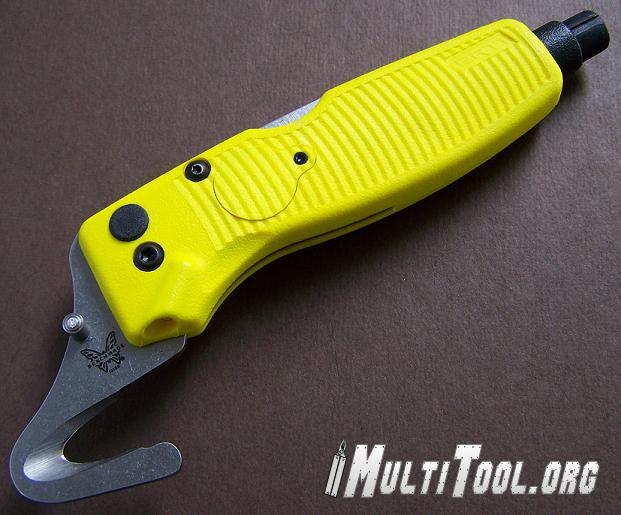 Benchmade has always been one of those companies whose quality I admire. They always produce a decent tool, and sometimes even at a good price! I’m sure that reputation is what lead them to breaking their lines into numerous different color sections, with the highest quality and priced knives being in the Blue Level, and the cheapest, China made tools in the Red Level. The Benchmade ERT-1 is a Red Level tool, but I wouldn’t let that distract you.

I was actually somewhat surprised at the “MADE IN CHINA” stamp on it as it seems to be remarkably well made, and is further proof that China made tools aren’t necessarily a bad thing, provided someone is minding the store.

The ballistic nylon pouch has a very secure Velcro closure, and can be worn horizontally or vertically on the belt depending on which you prefer. In addition, the ERT 1 has a pocket clip, which can increase it’s security in the sheath, or allow it to be carried/worn in a pocket or elsewhere.

The ERT 1 starts with a typical folding knife type design, but rather than some fancy fighting blade it has a fold out hooked cutting blade that can be accessed easily with one hand via a thumb stud. Out of the package it is set up for right hand use, but the thumb stud can be changed to left handed opening with a small Torx screwdriver (not included). A substantial back lock mechanism keeps the blade open and allows the blade to be easily folded away after use. The edge easily sliced through any of the materials I put it up against- webbing, small to medium wiring, rope, denim and even leather. I doubt extricating an accident victim and cutting away any restrictive clothing would be a challenge to this tool. 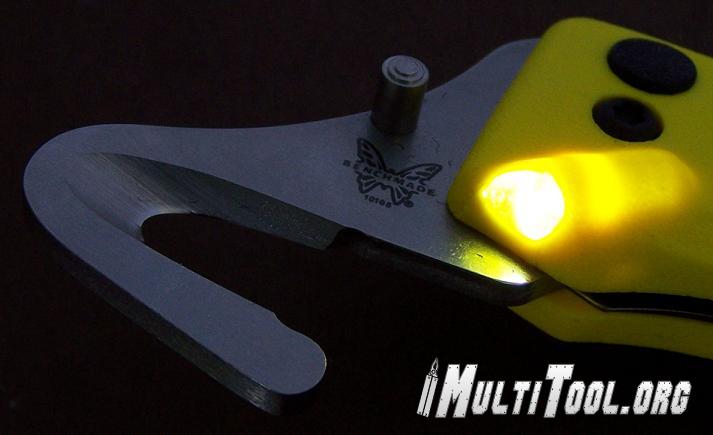 In addition, the handle includes an LED flashlight, with the switch being right beside the pivot point of the blade. The LED is on the opposite side of the pivot and is angled like a pistol for ease of use, and to effectively light up the area being cut. I’m not normally a fan of built in LED lights, but this one is well executed. It is also bright enough to use as a regular LED light, but not bright enough to reflect painful amounts of light into your face in an after dark rescue op.

Also included on the ERT 1 is a spring loaded glass breaker, similar to the one found on the NOV8 ResQMe tool, and the same warning applies- it is not a button, do not press it! Compressing the “button” builds up spring pressure, which eventually releases it’s load into a hardened steel spike capable of shattering a window instantly. Pressing it with your thumb is a very unpleasant experience- take my word for it. 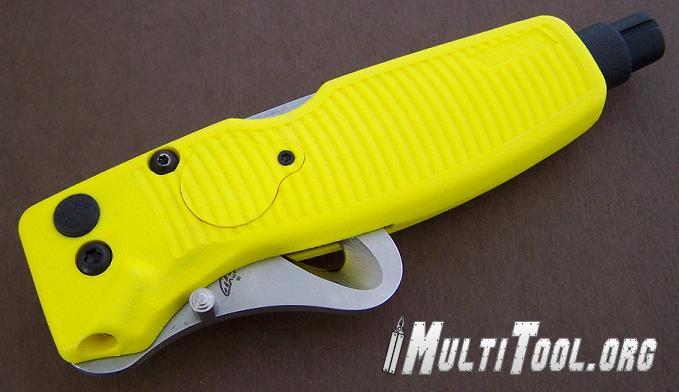 The last feature of the ERT 1 is the bright yellow handle. Bright colors help a rescue worker quickly and easily recover a tool if put down or dropped, and although this one is available in black as well, I would stick to the yellow handled version.

As with any tool, this one does have it’s drawbacks. The nice sheath does not want to let the knife go, and it can be a pain to draw as a result. More often than not when I try to take it out of the sheath, I switch the light on. Outside, during the day, this could be problematic as you may not notice the light is on, and you can kill the batteries much faster. The watch cell type battery is easily accessible with a Torx head screwdriver, but it might have been better to find another place for the switch, or find some other method of carry. It is also worth mentioning that while the majority of the tool is well put together, the battery compartment door is painfully obvious and does stick out somewhat. I can’t imagine this tool is waterproof as a result.

Also, this tool is limited in functions. While it would make an excellent tool for rescue where there is a full toolbox or other multitool, it isn’t terribly useful day to day, and shouldn’t be expected to replace a more standard EDC multitool. It has no screwdrivers, no knife blade, saw, scissors or any of the other functions normally associated with multitools, and so might benefit from being left in the glove compartment while you carry another tool with you. 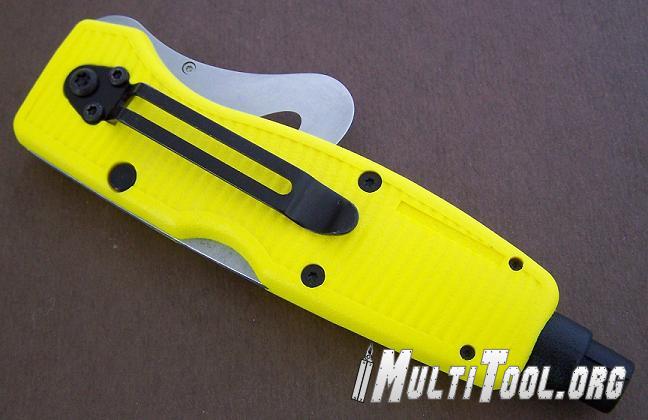 Lastly, and this is kind of an obvious one, the hook blades are a pain in the butt to sharpen and need to be done with a file rather than a traditional sharpening stone or other sharpening system like a Lansky or Sharpmaker. Of course, given the limited usefulness of a blade like this, it likely won’t need sharpening often.

Overall, it is a quality tool, and well worth the money if you are a first responder or merely the first one at the scene of an accident. It could also be invaluable if you found yourself in an emergency and needed to cut your way free. If you are looking for an EDC tool however, I would keep looking. This tool is very specialized, and excels at what it is meant for, but is virtually useless for day to day tasks.

More in this category: « Sure Fire Delta EW-04 Long Term Review ToolLogic SLPro »
back to top
Interested in this or a different tool and still have more questions?
Why not join us over on the Multitool.org Forum where our community can help you find what you're looking for!