First off let me say that this will be more than a review, think of it as “ramblings of a multitool enthusiast”. I have been a fan of the multitool scene ever since I was introduced to it around 2001. I had known about Swiss Army Knives, which virtually everyone carried, and of Tim Leatherman’s brand of tools that also were on the market. I never was a pocket knife person and never did carry one, let alone a tool of any kind, I just didn’t see why anyone would ever need one….and then I was hooked. A couple of the guys at work had pocket knives and I was not drawn in to own one myself but I did fancy the ingenuity and simplicity of them. On my birthday (Dec 12th) in 2000, the guys at work pitched in and bought me my first mulitool. Their choice was a Gerber Multi-Lite, since I seemed to be a person that might not like just having a knife; they figured they could give me something with a little more utility. Ever since I received that gift I have been hooked on knives and tools alike, my quest went from there to find the perfect multitool. Course problem being was; the market was quite saturated with so many tools that it makes ones head hurt trying to decide. With other brands adding to the above mentioned, like Bear MGC, Kershaw, Buck, SwissTech, etc. you really had to do your homework before you made your purchase.

Back in 2001 I did indeed do my research and at that time the perfect tool for me was the Leatherman Wave , I thought the one hand opening blades and assortment of tools were just what I needed. The Wave in its own right was king in its day and even now stands as an accomplishment in the forward thinking that has brought us to what we now carry as multitools. These days what one is looking for in a multitool is pretty much the same it was back then, only now there are even more tools and with the imported models out there being part of the scene. I have broken down the must haves for a multitool and this is what I came up with:

Opening of tools while the pliers are in the closed position

Knife (One hander if possible)

In 2002 or so, I ran a multitool review website (project with some help from friends and acquaintances) , I had the opportunity to review products for major manufacturers and place them online to aid those in the search for opinions on what people thought about a certain tool. I could not review every tool on my small budget and I needed donations from these companies to make the website possible. Obviously some companies were more willing than others, Leatherman and Gerber were not helpful at all but others like, SOG, Kershaw and Victorinox were willing to support me. Because of all this I have tried just about ever tool on the market, some I found were better than others and it’s not easy to pick a tool that is better than all the others. Every tool and manufacturer has its own pluses and minus when you compare them to each other, it’s really up to personal preference

When later that year a package arrived from Victorinox themselves I was floored to say the least! In it there was a Swisstool RS and a CS Plus , I was expecting to be blown off by such a large company as themselves and wasn’t waiting for anything to come from them and I must say I was very impressed. After much use I have to say this tool did indeed meet pretty much all the criteria I was looking for in an EDC tool, I have had it now for a couple years and it still serves me well to this very day. When I heard that Victorinox was making a smaller version of the Swisstool, what can I say but I was excited. What a great idea, take all of the things that make the Swisstool so versatile and shrink it down to the size of a Leatherman PST. The result is something quite unique; with this being round two on Victorinox’s launch of a plier based tool, the had some time since the first release to take time and rethink the tools and their layout to make the package overall smaller and better. Now I myself along with some members here at SOSAK, have some mixed feelings about the changes made to the Swisstool. I will break down the positives and negatives for you:

Pliers: Feature the same hybrid pliers which are neither blunt nor needle nose in nature. The wire cutters seems to be improved some since the first ST was released, course maybe that’s just me.

Handles: One word “Ergonomics”, Victorinox has taken it’s time to make this tool more sleek and rounded rather than square and brute. This tool is really comfortable to use in the hand, both when closed and when using the pliers. 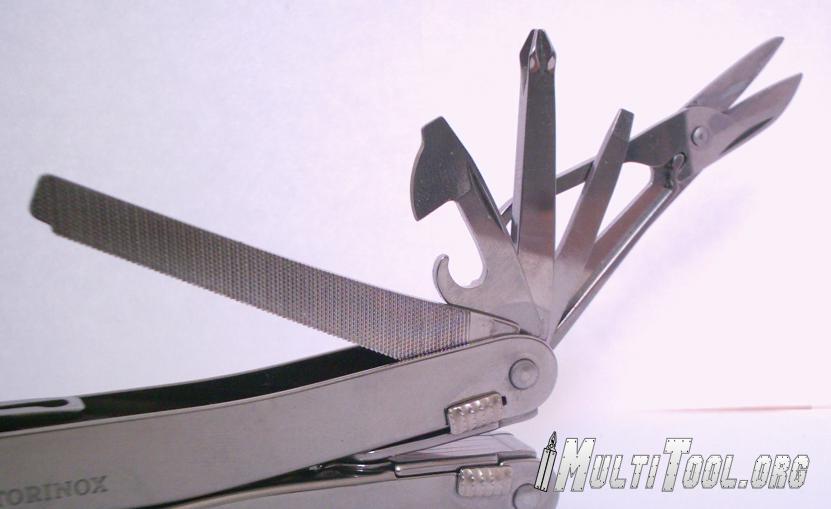 File&Saw: Same gripe as the original, the teeth on both don’t extend to the end of the tool. I feel if the teeth went to the end, you would get more done per stroke when using the tool than if they weren’t there.

Knife: Victorinox opted for another hybrid idea, with a spear point blade being Victorinox’s trademark; a move to serrated sheepsfoot blade baffles some of us. The serrations are very subtle and cover 75% of the blades surface, with the other 25% being a plain chisel edge. This blade works well for some things that require a sawing motion when cutting, but when a precise cut is needed it’s hard to achieve it with this style of blade.

Can Opener: Remains the same, if it’s not broke then don’t fix it.

Reamer/Awl: This tool has changed somewhat, the tool is usually sloped on bother sides but this time they have it just one beveled edge while leaving the other side vertical. This new style doesn’t work as well as their tried and true awl but it does the trick. Because of its design it does seems to be able to take more abuse than the original one on the first Swisstool.

Bottle Opener/Cap lifter: Same design as the previous Swisstool, but to replace the crate opener they beefed up the cap lifter so its super thick and can be used for prying.

Scissors: This is a fairly big change for Victorinox, they went from using their tried and true spring system that they have been using forever and incorporated a built in spring that rides off the springs which hold the tools in securely. This design is some what similar to Leatherman’s scissor style but what is disappointing is the distance the blades can be opened. I would have to say the distance is almost half of what you could get out of the regular issue scissors. I so find them somewhat odd to use but they seem stronger in comparison to the original.

Combi-Tool: The combi-tool hasn’t changed much; it still contains a chisel and two wire strippers; only difference is the chisel is now a three corner edge instead of a regular chisel edge. This little change allows you to really dig in when you’re doing some tight work with the chisel.

Phillips: Pretty much the same as all the standard issue Phillips drivers on Victorinox tools. I don’t think it’s centered as much as it’s pointed forward. With the Swisstool, the advantage of having your Phillips lined up dead center was it allowed for more torque. Small change but doesn’t affect performance too much as far as I can tell. 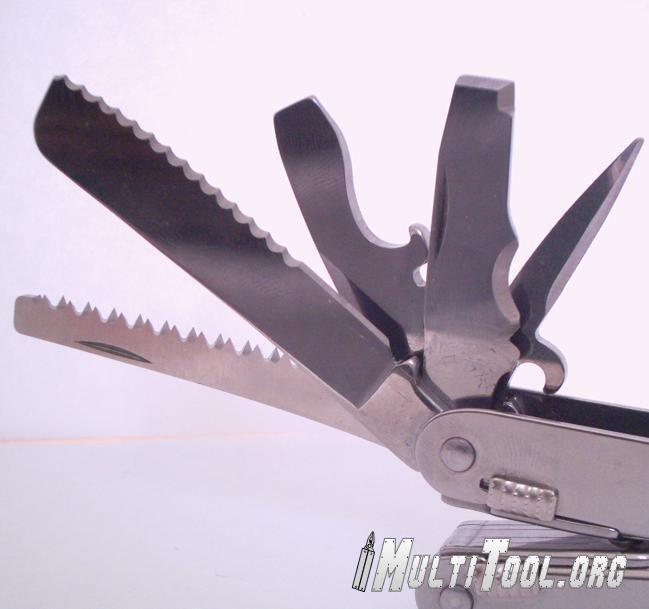 Well there you have it; as you can see the tools are pretty much standard but Victorinox has changed and tweaked a little to get more into the small package of the Spirit. After using it now for two weeks, it has become an extension of me and I don’t realize I am wearing it until I need it. The Spirit has proven itself invaluable and I could write another article, a quite lengthy one just about what I used the tool on in two weeks, but than is for another time.

In spite of the changes Victorinox has made to the original Swisstool, I feel their new compact design and choice of tool modifications will help keep their foothold in the multitool industry and give them the edge in future consumer purchases. Multitools are becoming and ever more presence in our work and daily lives and it will be important for those who wish to remain at the top to be competitive. Congrats to Victorinox on a great and bold new design, cheers to their future.

More in this category: « Victorinox SwissTool Review
back to top
Interested in this or a different tool and still have more questions?
Why not join us over on the Multitool.org Forum where our community can help you find what you're looking for!