When you ask someone to describe what a multitool looks like, most individuals will say Leatherman. Rather than trying to put into words what one looks like, Leatherman has branded the name multitool as the brand; similar to what other companies have done to their products e.g.. Kleenex , Goodyear etc. So the look of most multitools are the same, a pair of pliers where the handles pivot and hide the various tools that the multitool contains. Things were not always like this, there are many brands and designs that predate those made by Leatherman. The original multitool was a traditional style slip-joint pocket knife (similar to what your grandfather carries) and they incorporated a pair of pliers, fixed to the body of the handle. Unlike the small pliers you find on Swiss Army knives, this gave the user a more pocket friendly tool with the power of real pliers. 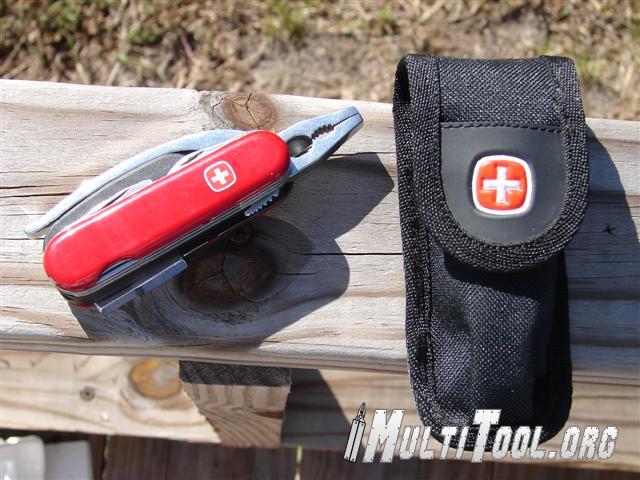 Wenger went with more traditional roots when they designed their Swiss grip series, one of the tools was massive and definitely not pocket friendly, the other is what is dubbed the Minigrip. What they had done is taken a regular Swiss Army knife and done something quite clever, not only does it have a real set of pliers on this tool but a bit driver as well, complete with a place to store the bits. The rest of the tool contains the standard Wenger features; can opener, saw, file, awl, bottle opener, and one really sharp fully serrated blade.

The pliers while stubby are decent and you can get a good grip with them but not much leverage, due to the short handle. The wire cutters are pretty decent, the greatest diameter I have cut with them is a clothes hanger and they held up well. Please note that they do not have a hard wire cutter area and the cutter is offset on one side rather than in the middle like traditional multitools you see on the market today. Another cool feature of the pliers is that they are spring loaded, how long the little spring will hold out is the question; but it works rather well. Plus the lock that holds the pliers closed is simple and ingenious.

The driver is another cool thing about this unusual tool. Where the corkscrew normally goes on a Wenger, they have left a short metal stub to which a magnetized bit driver is attached. You simply pull the driver off and insert it into the hexagon slot in the rear of the tool. Since the driver is magnetized it prevents those pesky bits from falling out. And all of the bits you can carry and store inside the plastic bit holder are at your disposal for whatever the task requires. 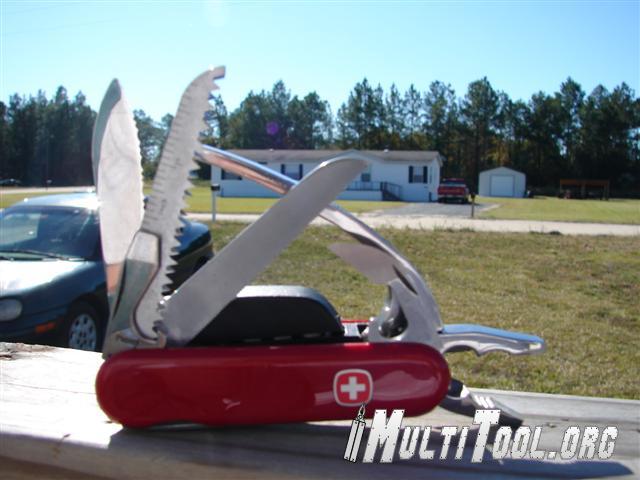 Although this is one neat little tool it does have some short-comings. The sheath the tool comes in seems to be made for another SAK and not this tool, because it does not fit well like it should. What Wenger should have opted for is a custom make sheath to hold it’s unusual shape. The only other thing is the lock that keeps the pliers closed is not strong enough. When using the bit driver, I find the pliers constantly springing open on me.

Overall for a tool that pays homage to its roots, it’s definitely worth checking out and if you want to see what started the genre. Tools of this kind are fading fast and being replaced by those of the Leatherman kind. Wenger has a winner with this piece of history.

More in this category: Wenger SwissGrip Review »
back to top
Interested in this or a different tool and still have more questions?
Why not join us over on the Multitool.org Forum where our community can help you find what you're looking for!