If you are a multitool collector, or one who appreciates the engineering that goes into these products, and a person who delights in the new and seemingly endless ways that these clever engineers can make a set of blades and drivers fold up into a pair of pliers, then you will like the new Gerber Radius Multi-Plier. If you are anyone else, then I suspect you will consider the Radius to be somewhat of a joke. 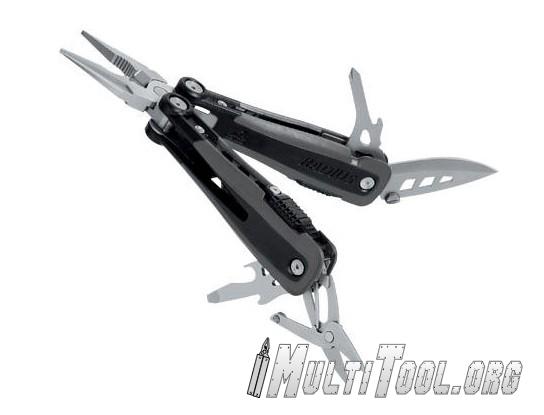 Sorry to be blunt, but this tool is about the goofiest contraption to hit the market ever. To begin with, it’s freaking huge. The handles are easily twice as thick as any other quality multitool I can think of. Now granted, the squishy soft rubber overlays give it a most comfortable grip. But because it is so fat the handles don’t fit a person’s hand properly, somewhat negating this advantage. Shown below is an on-edge view of the Radius, positioned next to a standard 600 Multi-Plier. 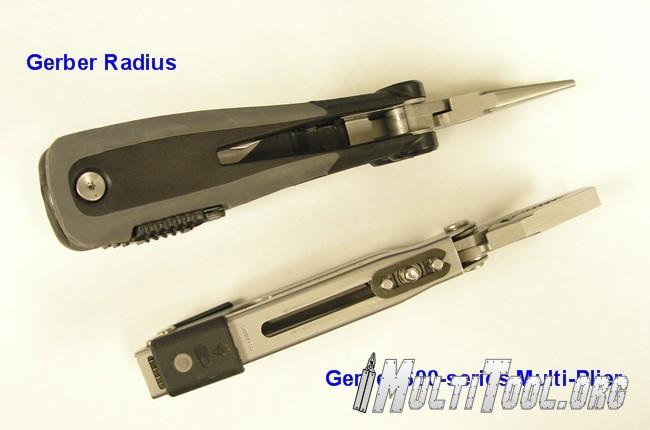 The other thing that makes the Radius unique is the way the blades fold. Instead of being in-line with the axis of the pliers, these blades all fold at 90 degrees, from the front and back sides of the tool. Previous multitools that employed this side-folding method were the Schrade Tough Tools and the bizarre Flip-Grip. However, none of these older tools were nearly as fat as the Radius. 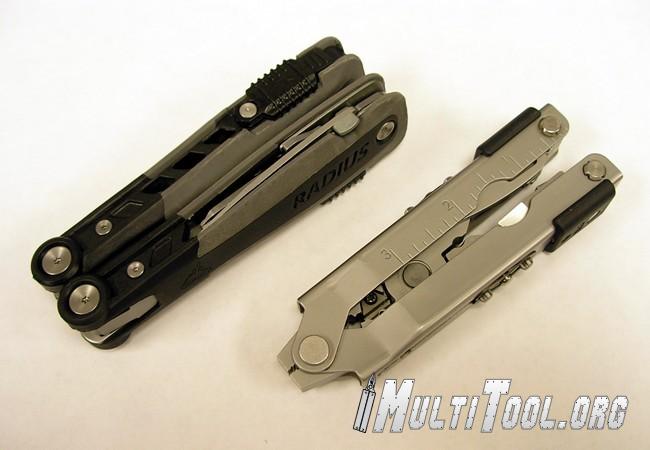 All of the blades do lock open securely on the Radius, and all unlock by means of small slider switches along the edge of the handles. (Which unfortunately serves to make the handles even thicker yet!) Oddly enough, there are only four blades total, two on each side. 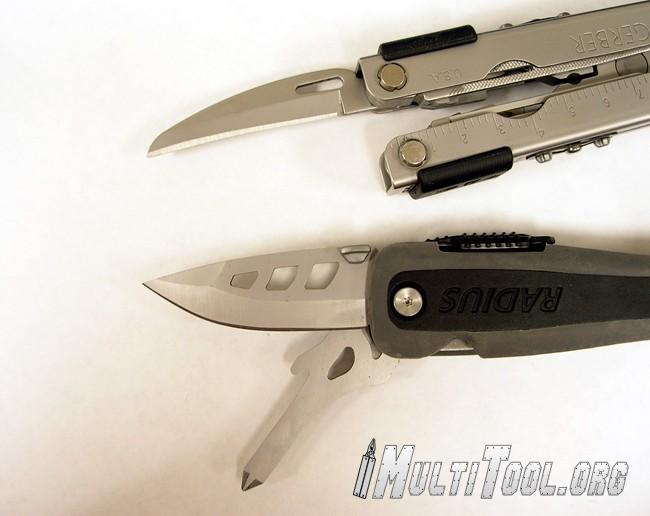 The thing you first notice about all four blades is how unusually fat and squatty they all are. The one-hand opening knife blade for instance, while about the same 2-1/2” length as the knife on the Gerber 600, is well over twice as wide. It is sharp enough and all, but feels dorky and clumsy to use. I don’t like it. Also on-board this handle is a flat blade Phillips screwdriver with a wire stripper notch near the base. The best that can be said about the Phillips is its length, which far exceeds that of any Gerber tool which proceeded it. 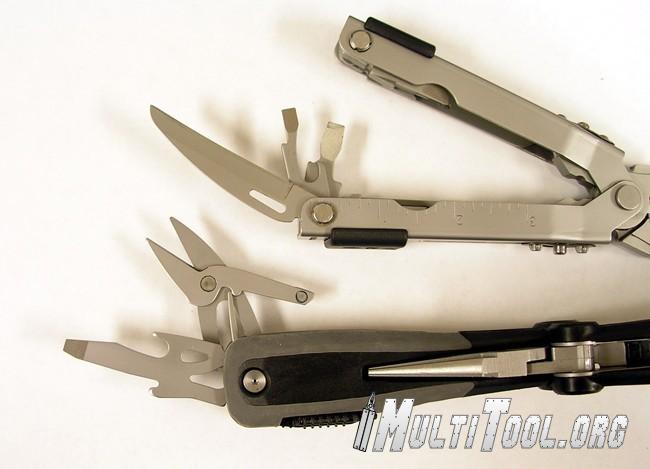 The opposite handle packs a set of folding scissors and a combo flathead screwdriver/bottle opener blade. They are both fat and odd looking as well, although the long screwdriver length is again an improvement. 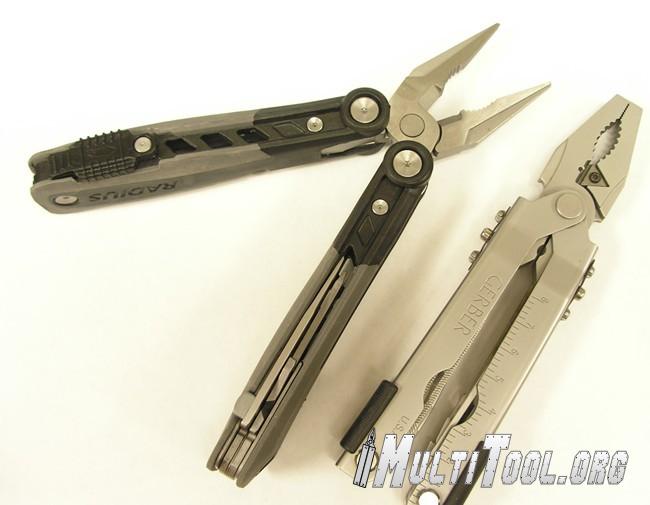 Pliers on the Radius are spring loaded, a feature that I have come to appreciate. For some reason spring loaded pliers on top-of-the-line multitools have not really caught on yet, the little Squirt P4 and SOG CrossGrip being two exceptions I can think of.

The plier head itself appears to be borrowed from the earlier Gerber Legend 800, more recently reincarnated on the Gerber Suspension model. It has a useful shape, with crisp serrations, ample wire cutter area, and a hard-wire notch. 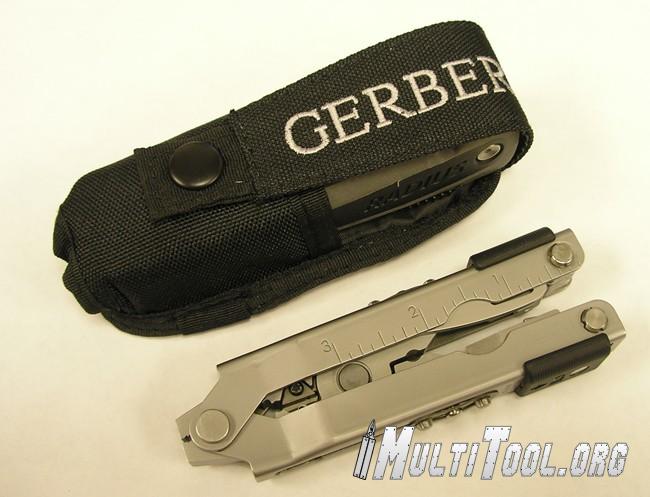 All-in-all, for a product being built in China, the quality and construction of the Radius isn’t bad. It is the basic engineering of the tool that causes a person to shake their head in wonder. How on earth did anyone think this big fat sucker could compete with the other, slimmer yet more capable, multitools on today’s market? Especially at the current asking price, which seems to be $49 at most internet sites I’ve checked. You could get a lot more tool for a lot less money.

Sorry Gerber, I like and use many of your other products, but the Radius won’t be one of them. It is destined for my “rare collection oddities” drawer, as I expect it won’t remain available for very long.

More in this category: « Gerber Auto-Recoil Revisited Gerber Suspension Review »
back to top
Interested in this or a different tool and still have more questions?
Why not join us over on the Multitool.org Forum where our community can help you find what you're looking for!