Written by Spoonrobot
Notables No.1: The skinny on a fat tool; the Gerber Auto Recoil

Updating Gerber's unique out-the-front sliding pliers to a button-activated spring-loaded mechanism, the Auto Recoil has no peers in the multi-tool world. Being that there are no others to directly compare it against it is so easy to label it as a "gimmick" and move on to other, more mainstream tools. What we are here to determine today is whether this tool has redeeming characteristics or if it is merely a "gadget" for the uninitiated to purchase on impulse, play with for a few days and ultimately spend it's life in the junk drawer or the bottom of a landfill. 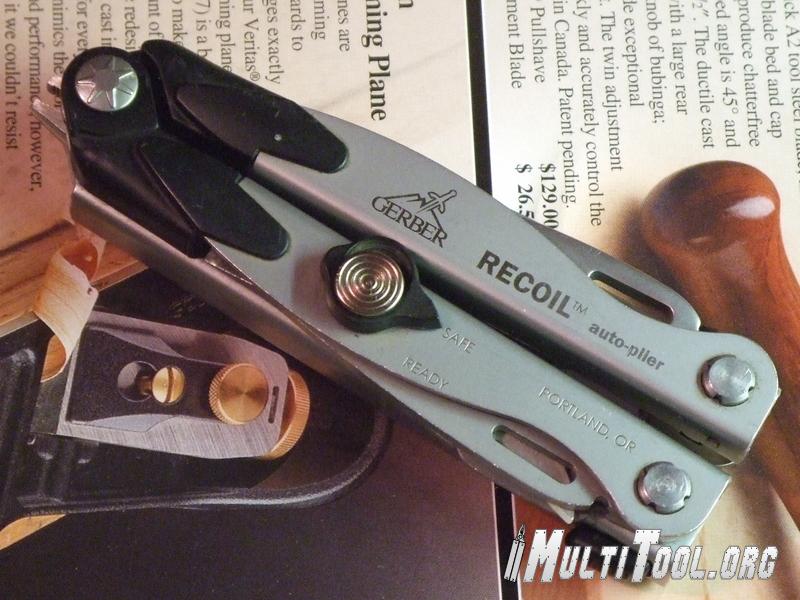 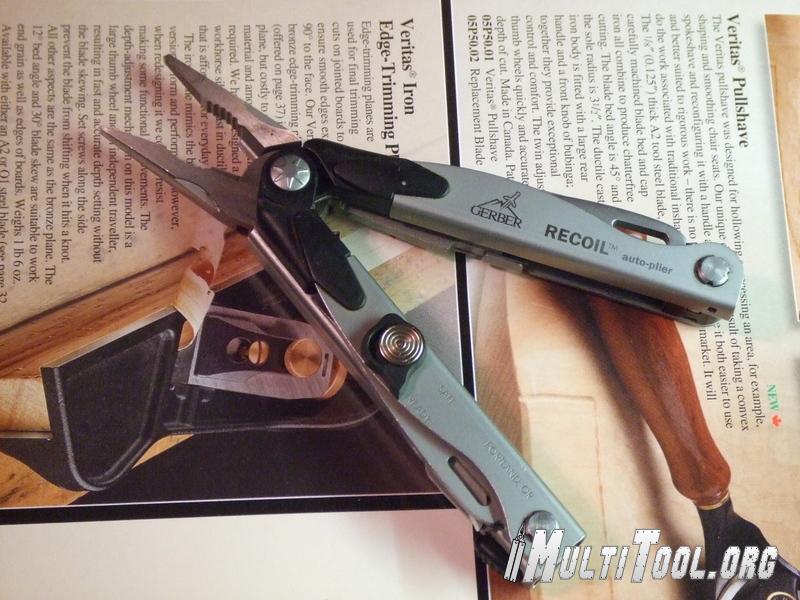 Being the main source of interest we shall begin with the pliers mechanism. The pliers are a needlenose shape with an uncommonly thick point, in essence the typical multi-tool plier head. Using one spring in each handle the pliers are fired by a brass-button that, when released from safe, releases the energy of the two springs and throws the pliers forward with intense force. The springs do their job very very well, I have yet to see the pliers only partially fire. Each push of the button throws the pliers forward with a satisfying *SNAP*. The pliers are retracted by pressing the firing button and pushing the tip of the pliers back against the spring tension to re-seat the pliers in the handle. The easiest way to do this is to find a rigid object and push the plier points against it until they lock. Now, it is entirely reasonable to use your hand, pant leg, shoe and so forth but any option involving the human body is usually fairly uncomfortable and not something you want to spend all day doing. Using your hand requires a good amount of force to get the pliers inside the handle and an extra dose at the end due to compression of the flesh and the overall depth the pliers much be pushed to seat (it's really no fun after the first couple tries). An interesting feature of the pliers is that they are not only fired by spring tension but are held open by the same force once fired. The spring for this action is held under the main handle pivot and is a welcome addition, this feature is a lacking feature on the large majority of full-size tools. There is also a safety for the firing button that slides from safe to fire. The safety is held by slight tension and seems fairly easy to accidentally trigger but I have had no problems with accidental discharge so far. 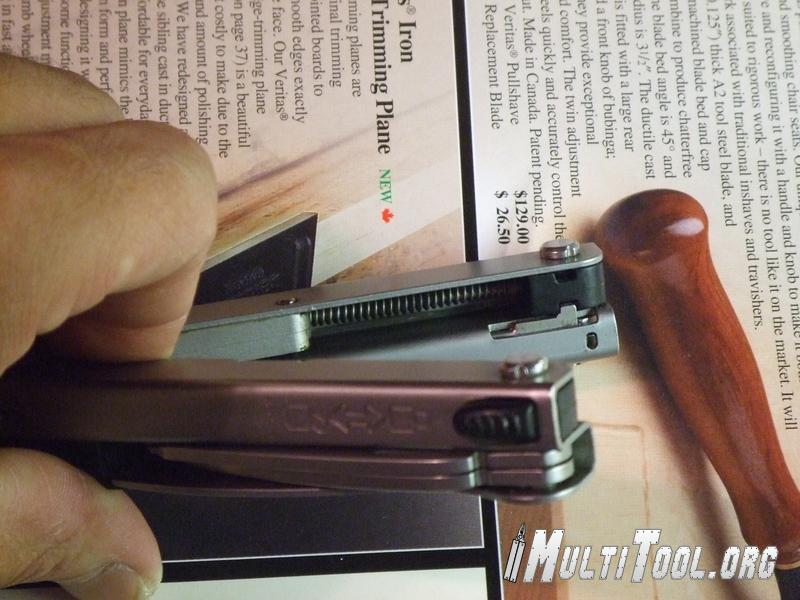 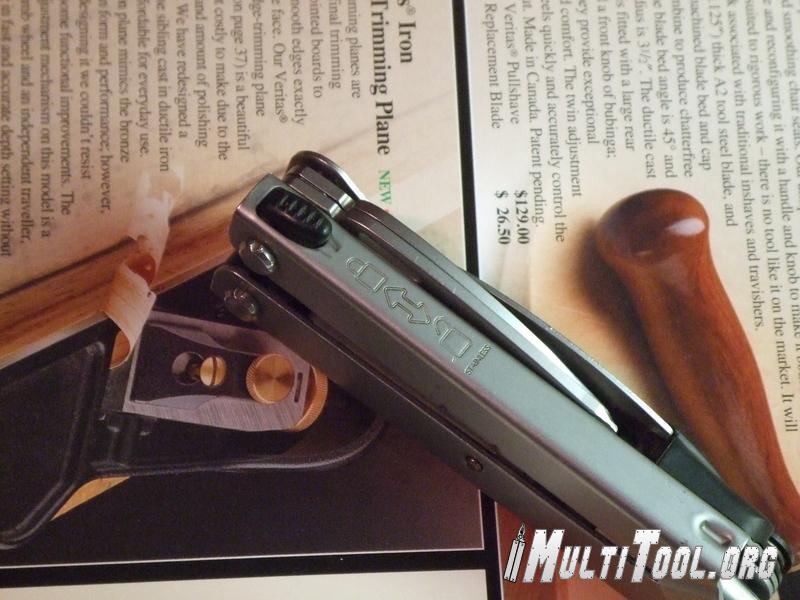 The main firing springs also serve to create tension on the implement lock(s) on the outside of the handle. This is a good idea but creates some issues. The most noticeable is that on most models, when the pliers are in the closed position, the spring pressure is too great and the tools cannot usually be opened with one hand despite being placed in an accessible position with thumb cutouts. The tools do become significantly easier to remove and can be done one-handed when the pliers are open, but that really negates the point of outside opening tools. The second issue is that the lock release tab is fairly difficult to release when the pliers are retracted, again due to the spring tension. The tabs are textured with five raised ridges but they are still difficult to use with wet/slippery hands and not nearly as easy as they should be with dry hands. This issue also goes away when the pliers are in the open position. 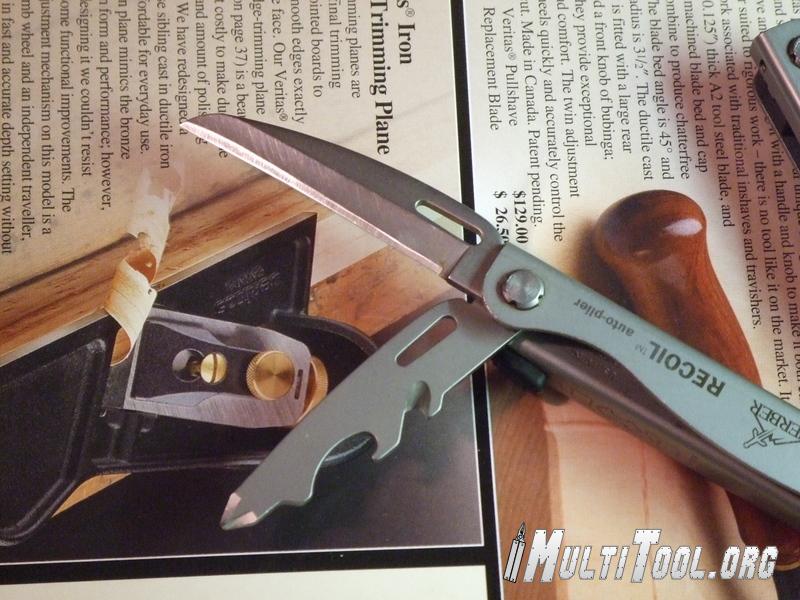 There are two implements on each side of the handle. On the non-firing button side there is a semi-hawkbill shaped blade and a combination tool featuring a flat (but still 4 prong) Philips driver, a cap lifter and a seatbelt cutter. The Philips driver has good depth but may be limited by the overall width of the combo-tool. Although flat, it fills common screws nicely and works well up to medium use applications. Due to the nature of this implement I do not recommend heavy use. The cap lifter is functional. The seatbelt cutter is a waste of space, it is completely non-functional. This is due to being ground to obtuse and being poorly placed under and behind a screwdriver and cap lifter. For one with extremely short fingernails the Philips/Combo tool is difficult to extract due to it being on the "inside" of the knife blade and the depth of the thumb cut-out. My usual routine is to open the knife blade first and then pull out the Philips/Combo tool.

The knife blade is an interesting design not usually seen on multi-tools. A shallow, sweeping hawkbill this blade performs well but I would prefer to see a flat or saber ground blade in place of the mid-hollow grind. *On current production models the blade has been changed to a more conservative spearpoint blade. 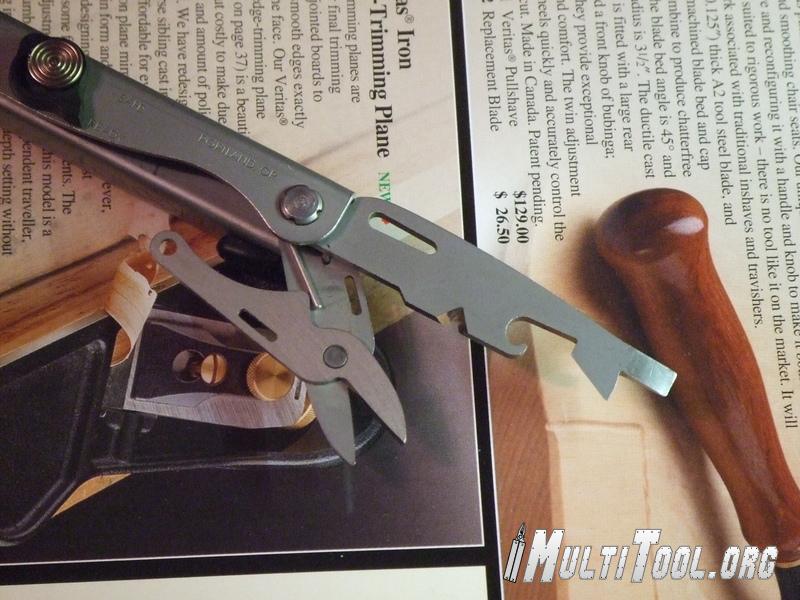 Moving along to the other handle we shall begin with my most favorite of implements; the folding scissors. This tool, like most Gerber tools, features Fiskars scissors. During cutting the scissors performed well on common applications such as paper, string, fishing line and medium cardboard. There was slight discomfort noted when cutting for long periods of time, you don't want to drag this scissors with you to kindergarten but they will work well for small tasks. Continuing on to the problem area the scissors are much to easy to over compress and force the motion handle into the gap left by the stationary handle and the washer that prevents clumping. Most often when this occurs it is a simple matter to insert a fingernail in the nail nick on the motion handle and pull it out but it is possible to get it really jammed, requiring force to remove. The tip of the knife blade in the picture below shows the washer where the handle gets jammed. The other tool on this handle is a Combination medium flathead, small wire stripper, and can opener. Each of these tools works well but not as well as dedicated implements on other tools. This is a good blend of implements organized onto one blade. 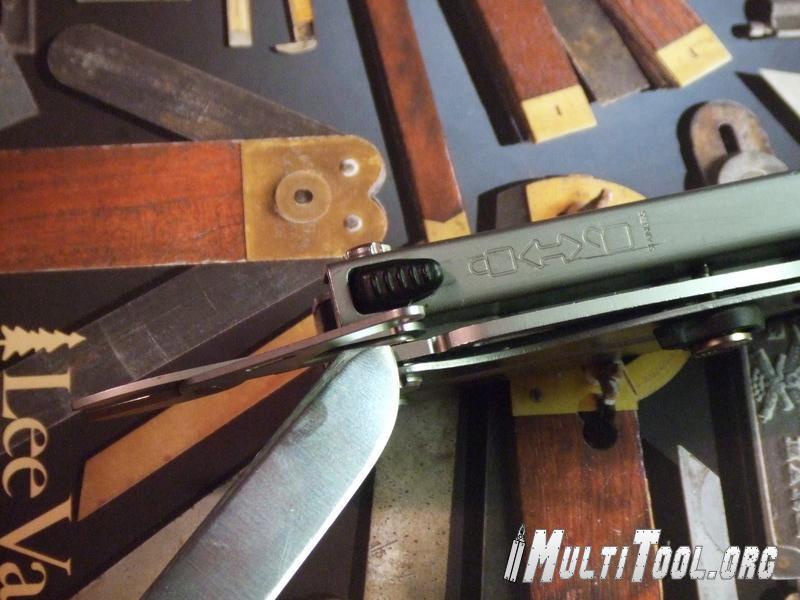 The last item in this section and the first thing the end user will notice when handling this tool is the massive thickness. The spring corridor takes up just as much room as the two implements so much of the bulk is due to the main operating system. 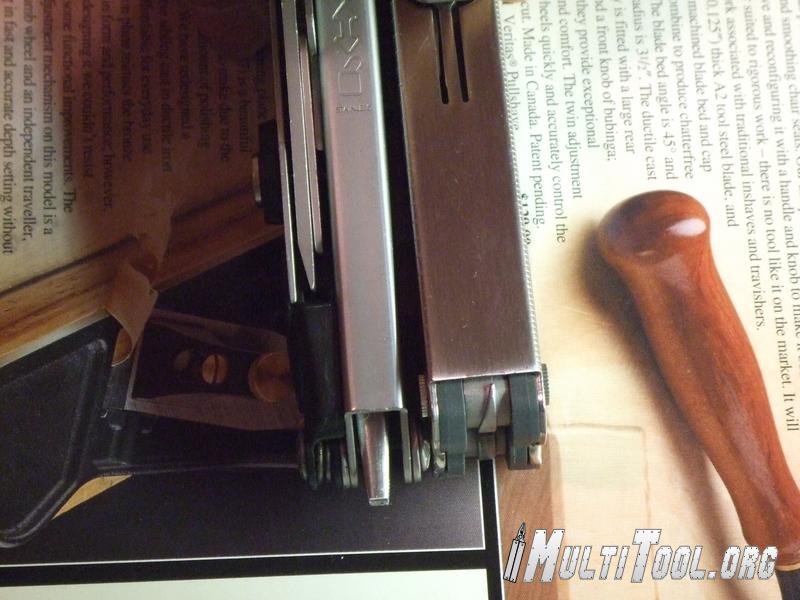 As thick as the Core all over but with an added 1/4" where the firing button protrudes this tool is quite the fatty. With such few implements and such a great width and fair amount of weight this tool does not place high on the useability/size chart. I like the twice spring-loaded pliers and find the tool overall interesting and useable but would be remiss to recommend this as a good tool for anyone other than a casual user or one use uses mainly the pliers and likes a small selection of tools on board. This tool is an interesting development and certainly presents the user with something different but one gets the distinct feeling it could be done much better, here's hoping to future variations of this device.

Firing the pliers has yet to become boring though, providing endless entertainment could certainly be added to the list of functions for this tool.

More in this category: « Gerber Center Drive Multitool Gerber Radius Review »
back to top
Interested in this or a different tool and still have more questions?
Why not join us over on the Multitool.org Forum where our community can help you find what you're looking for!