I recently acquired my first outside-opening tool (thanks to supratentorial) in the form of a Bear MGC (now known as Bear and Sons Cutlery) Bear Jaws. I have been resistant to outside opening tools for some time, mainly due to the exposed nature of the tool compartment and the seemingly easy access this would give dirt, dust and other miscellaneous crap. After carrying and using this tool for only a week or so I have realized that even if the tools are bare to the elements the easy access to said tools heavily outweighs the supposed detriment. 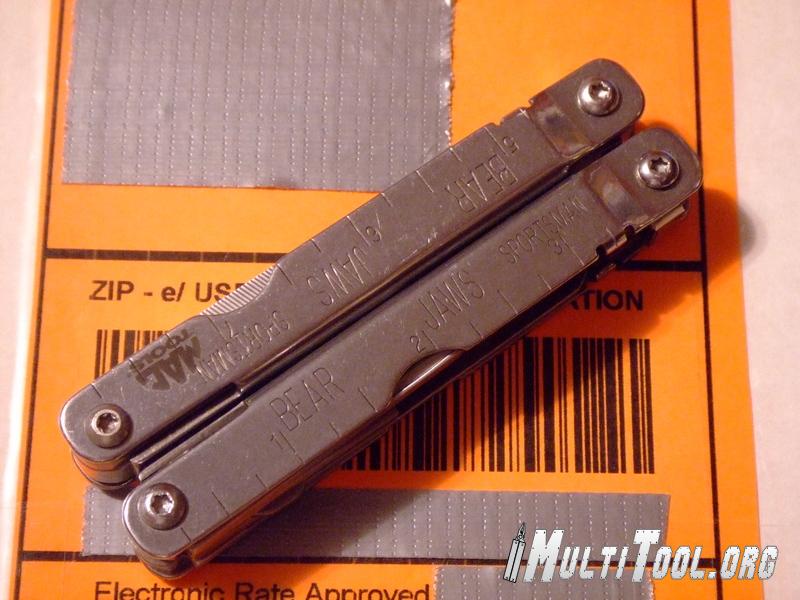 Scary name aside (rawr!), lets get down to the bare facts. 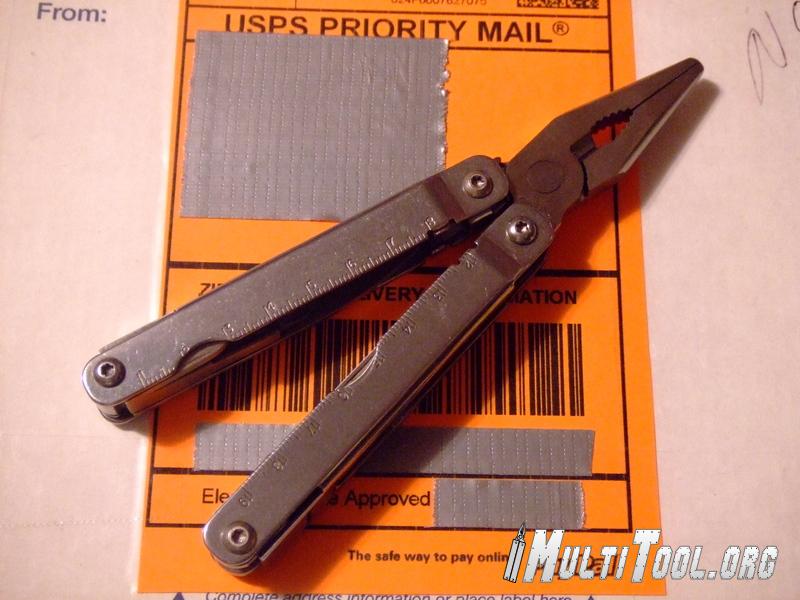 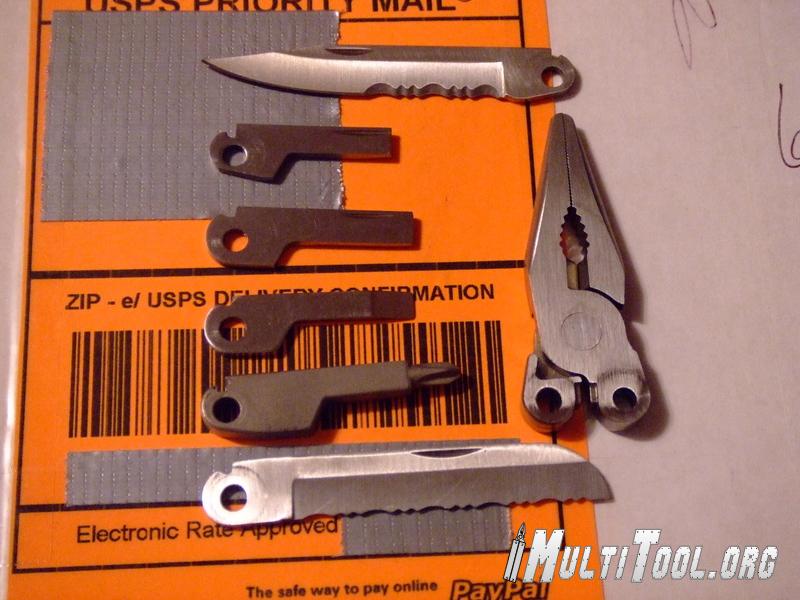 Fit and finish are excellent. The handles of the tool are finished with a very high, almost mirror, polish and feature crisp ruler and brand name stampings. The individual tools are not polished or finished as highly as the handles but they are still presented with clean lines and a good medium finish. All the tools open smoothly and snap into place, they do not lock but are held in place by the familiar flat backspring. Opening the pliers I was pleasantly surprised by the amount of forced required to get them to lock into place. Seen below it is easy to make out why, the part of the handle (name?) that engages the friction ramp is much thicker than comparable tools and as such requires more force to open fully. I feel this is a good thing but I am unsure if it creates more wear due to the increased forces at play or if it just makes the tool more durable, we shall see. 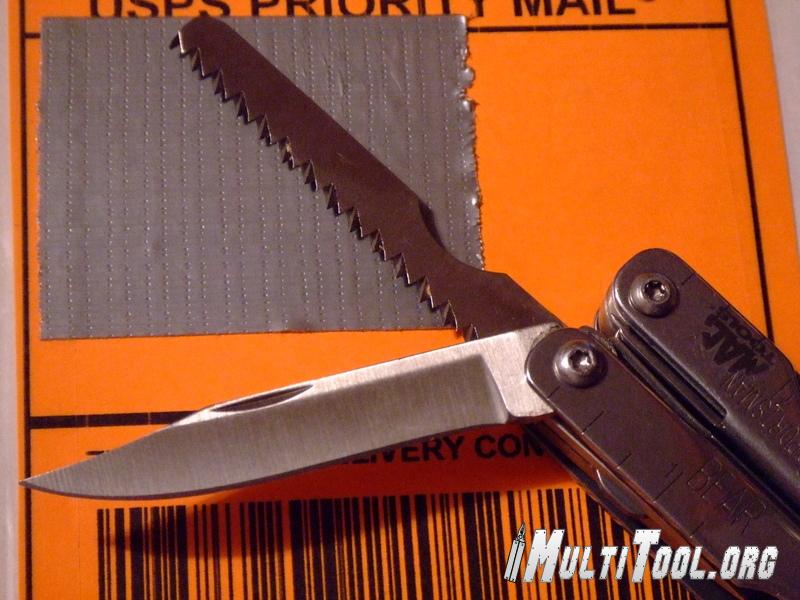 Moving along to the implements, it is immediately noticeable that the tool is held together with regular ol' Torx fasteners (yay!). This allows the tool to be broken down, adjusted and generally serviced easier by the end user. It also allows parts to be swapped in or out. Although supratentorial included extra parts with the tool I was unable to find them available on the Bear and Son web page (to be nice: it kinda sucks) nor at my usual retailers. So until he chimes in with where exactly he acquired these wonderful mystery parts our query must remain unfulfilled and we may suppose that perhaps he was given them by a beautiful princess for safekeeping as she fled the hordes ravaging her homeland, ever in search of her prince. Uh...Although customization is simple and easy let us review the tool as I have made it. 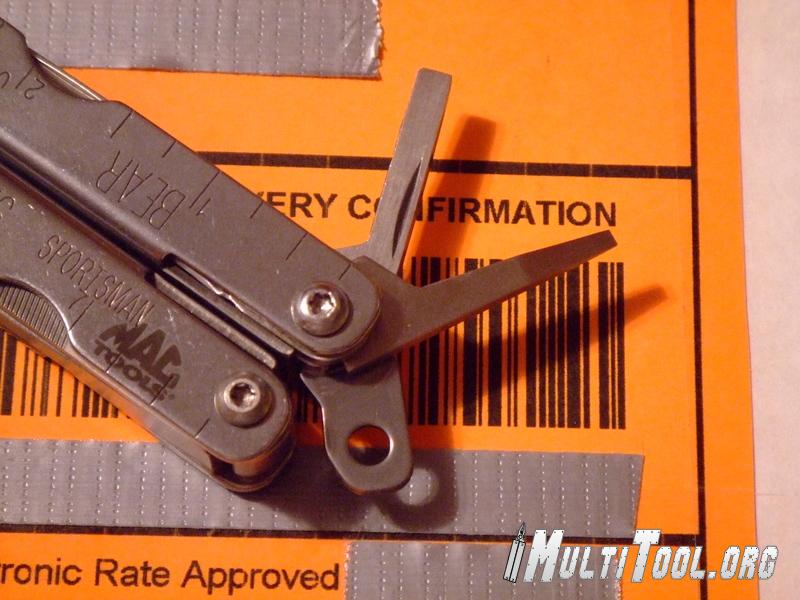 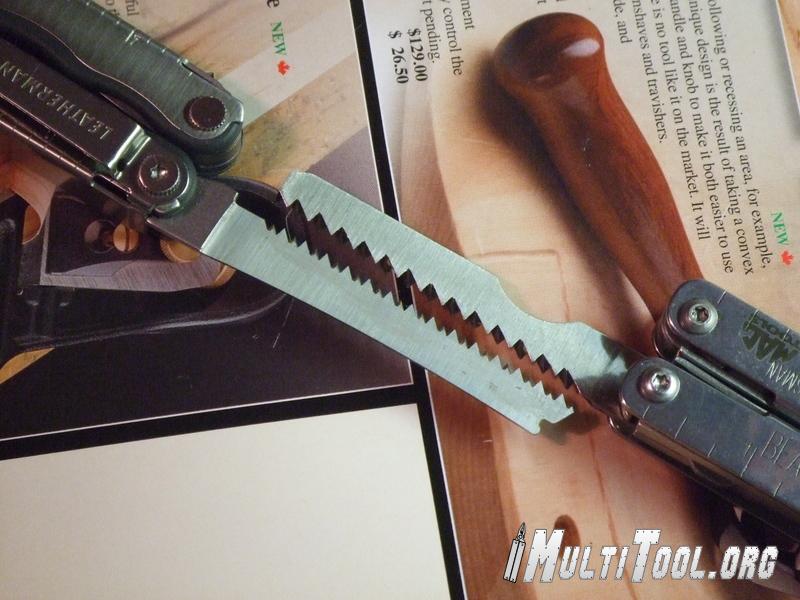 In one handle there is a clip point plain edge knife blade, a wood saw, two flathead screwdrivers of differing size and my arch-nemesis; the wonderful folding lanyard ring. The saw blade has the largest teeth of any integral saw I have yet to see but works well enough for a slightly fatty blade with big teeth. The drivers are typical fare as is the knife blade, all are good implements that function well. This, due to their design of being inline with the axis of the tool, reducing the typical multi-tool wobble. The tools do not lock but they are very resistant to accidental closing under pressure. 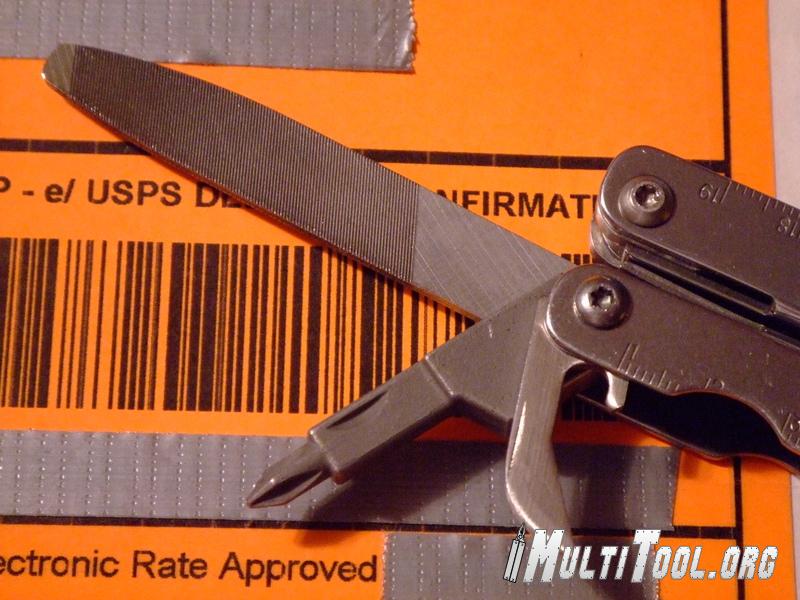 The woodsaw compared the Leatherman saw on a Blast. 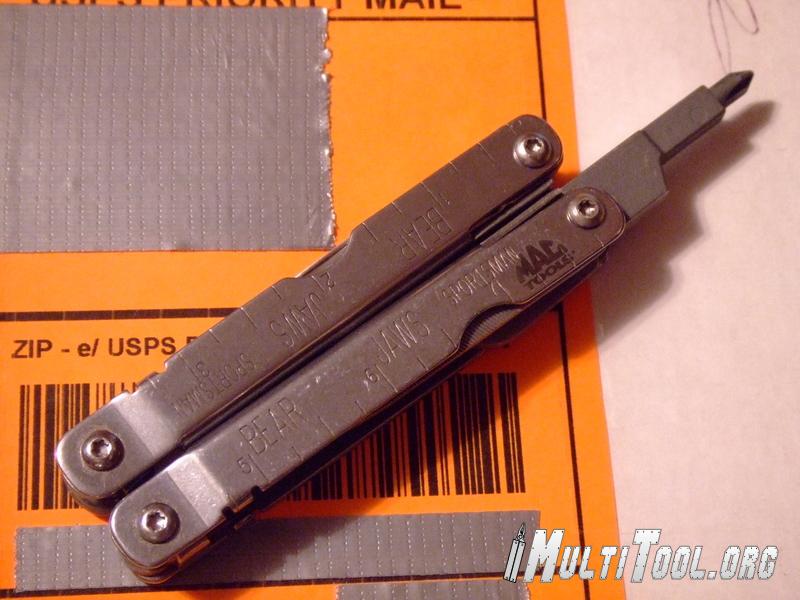 There's more!; in the other handle there is a metal file which includes a metal saw section, a can opener and a ridiculously thick and sturdy philips driver. The file is adequate but I will wonder why such a large section is uncut, perhaps they were in hurry? Next in line is the philips driver; fully one of the most massive drivers of this type I have seen on a multitool. It's shear existence begs the question: Hey buddy, need something to anchor that aircraft carrier? I think the thickness could have been reduced just a hair with most of the functionality retained but it would lose it's funny novelty status. The driver does fit common philips screws and is cut very cleanly. The last tool in this handle is the can opener and assumed cap lifter. It seems small when compared to the philips driver but functions fine in the can opening role (better than my first wife. Haha! But seriously you've all been great, have a drink on me) and should work moderately well in the cap lifting role. I could not test the latter because I was too lazy to find anything with a cap that was not lifted and flicked around the room already so it may work or it may open a black hole and cause widespread spaghettification, be careful. 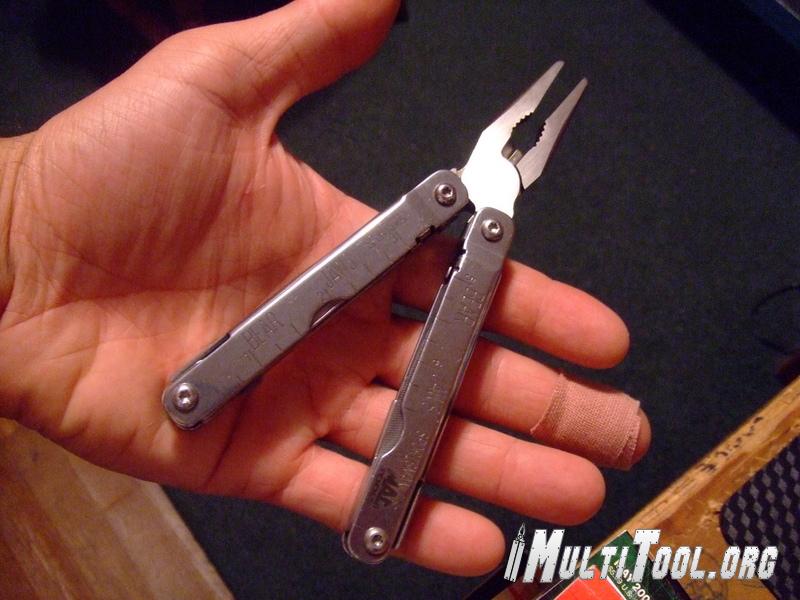 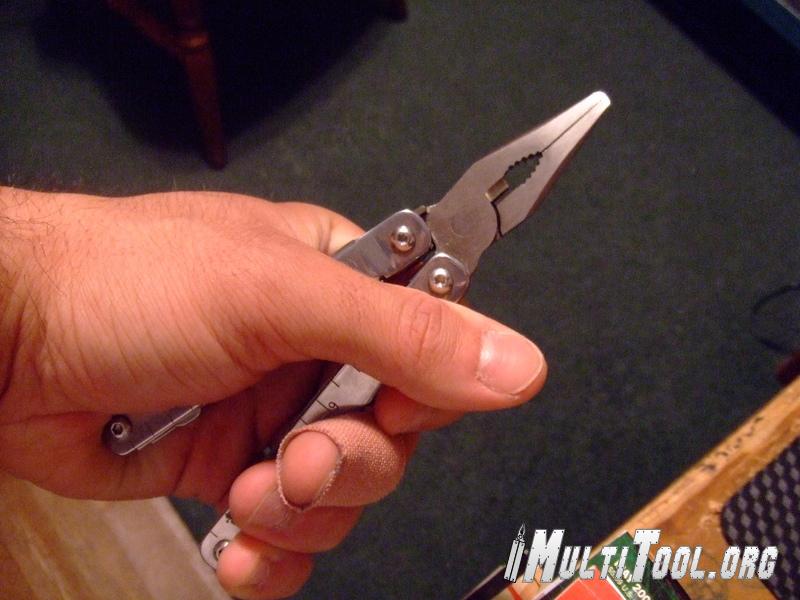 Tearing through this review like a famished grizzly through a wicker picnic basket (oooh! the imagery!) we now become critical of the pliers. Featuring typical multitool styling these pliers are finished nicely with clean lines and cuts. The tips are fairly thick but align precisely, I have found they do not function well for splinter removal but they are no doubt much stronger than the thinner style tips that would. The overall plier system seems extremely beefy and resistant to wear, due mainly to the doubling of material around the pivot points. Although this doubling serves the function of the opening mechanism is also works as a stiffener (stop laughing) that enforces the plier pivot points against lateral stress. This gives the tool a very good feeling in use and is nice to see such durability on this size tool. The pliers also feature wire cutters 1/4" in length. I cut some zipties, some rusty stranded wire I found in my back yard and a bank receipt. The wire/bank receipt cutter worked on all the items with no binding. No hard wire notch is provided leaving the pliers slightly bare looking when compared to other tools (::dies laughing:. Fun stuff; the handles are comfortable under heavy pressure, they are bare of any hotspots (again!). 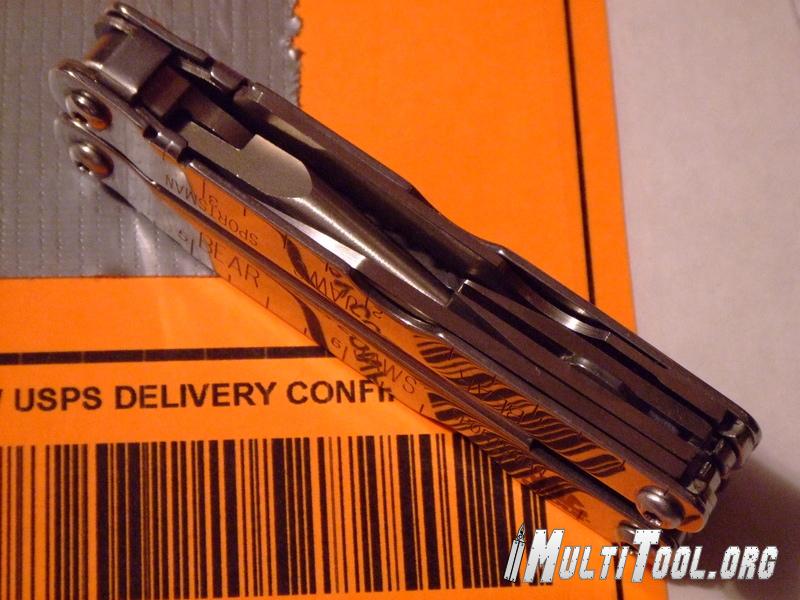 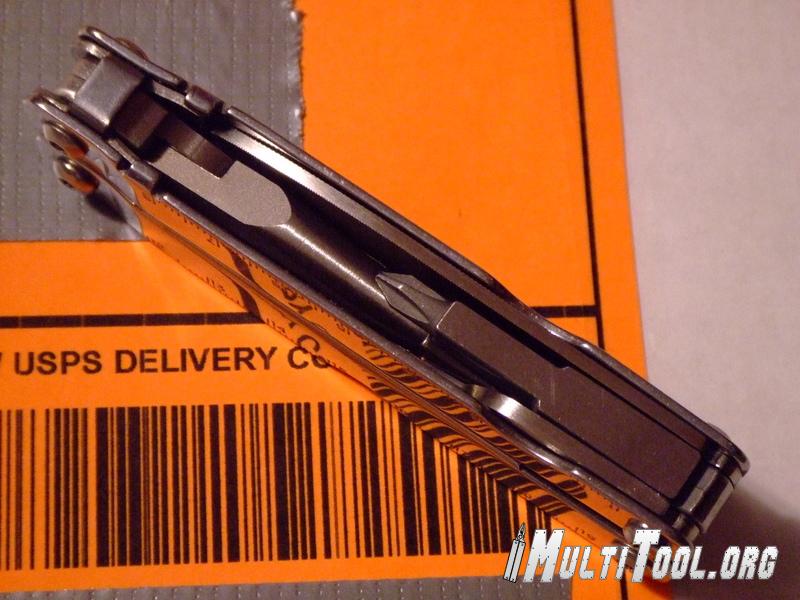 Leatherman Kick is on the left, Bear on the right. Note the relative thickness of the handle area around the plier pivots. 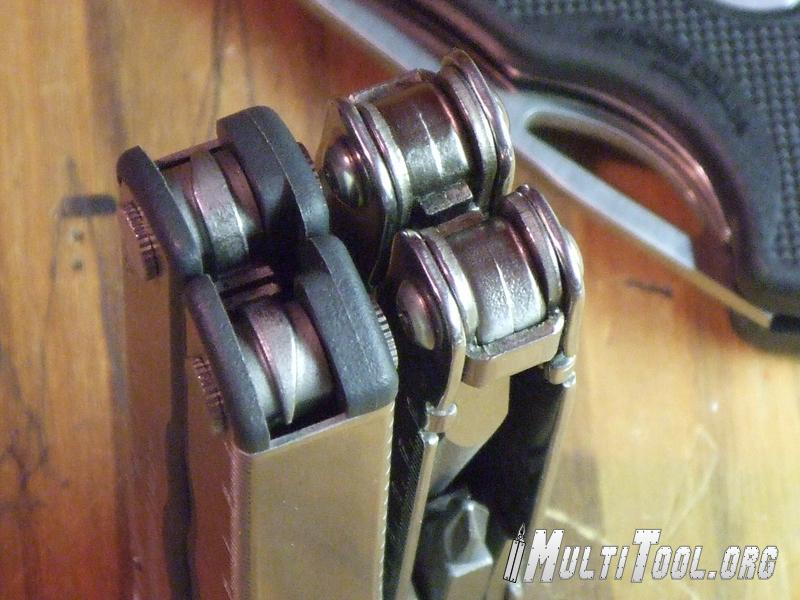 To wrap this up so I can get some dinner (welcome to Moe's!); this tool is well made and very sturdy with very good fit and finish. The tool selection is smaller than other similar size/weight tools due to the folding lanyard ring and the celestial sized philips driver but overall it is still a good variety. It would also be nice to see some scissors.

More in this category: « Sheffield Mountaineer Review Schrade NaviTool Review »
back to top
Interested in this or a different tool and still have more questions?
Why not join us over on the Multitool.org Forum where our community can help you find what you're looking for!