The pocket tool category seems to have exploded in the last year or so. I am continually finding more folks who either make custom pocket tools or companies who are just joining the market. We thought since the release of the Artifact and Shard tools from Gerber; there would be no other big companies who would jump on the bandwagon. Well seemingly out of nowhere a company called MK7 announces that they are going to start producing pocket tools that are going to be made of high quality materials similar to custom makers like Peter Atwood. The first tool on their list to be released was the Piranha; this tool has started more of a stir in the knife/tool community than the Gerber tools ever thought of doing. It’s really a mess and in this review I am not going to choose sides or dispute issues of who stole what intellectual properties. I am going to lay out the facts like they are and you can draw your own conclusions. 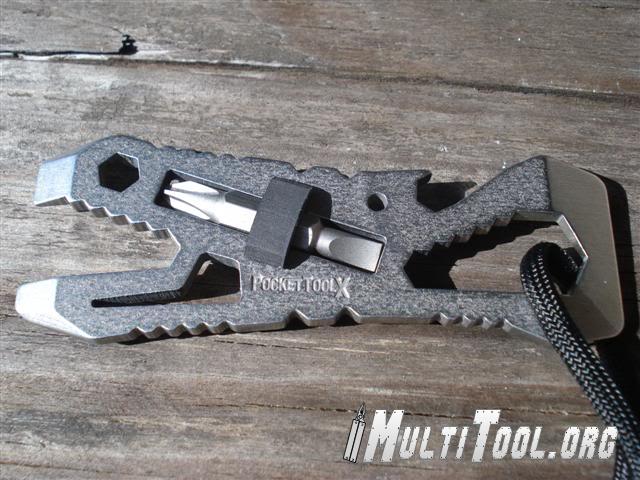 The Piranha is a very robust pocket tool and is a good choice in my opinion for a first release from this company. Most pocket tools are a little on the smaller side and are really more for keychain carry than for pocket duty. I myself do pocket carry my tools more often because I like having them at the ready and not tethered to a key ring. This tool is about four inches long and two inches in width, quite larger than other tools of this style. Its extra size is good because it gives you a considerable amount of tool to get a purchase on when using the wrench or any one of the other features. In spite of its size it doesn’t take up as much pocket room as you might think and is rather kind to our pockets due to the rounded edges. Made out of 154CM stainless it also resist corrosion well. I have bad luck with tools and stuff being tarnished. The Piranha comes out strong though to its combination of steel and finish. 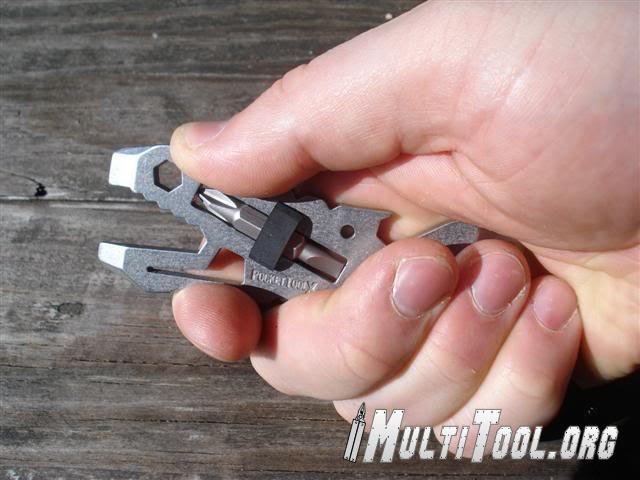 One thing that really grabbed my attention with the Piranha is that is has wrenches similar to other styles available on the pocket tool market I am pleased to find that they work rather well on most sizes of nuts you find available (those from ¼ to 3/16) and having the option of a box end or an open ended wrench certainly comes in handy. There are numerous times when I needed the open end and a box end would have been totally useless. Having both is a nice blend and offers more versatility to this tool than if you only had boxed ones. My only gripe about the wrenches is the fact that there is a limited amount of sizes available. I feel that it would be nice to either have more sizes available similar to a Pocket Wrench II or offer SAE on one side and Metric on the other. After hearing of an update from MK7, it is nice to learn of a future model of the Piranha called the “Piranha X” will feature both sizes and thus offer more versatility to this tool. 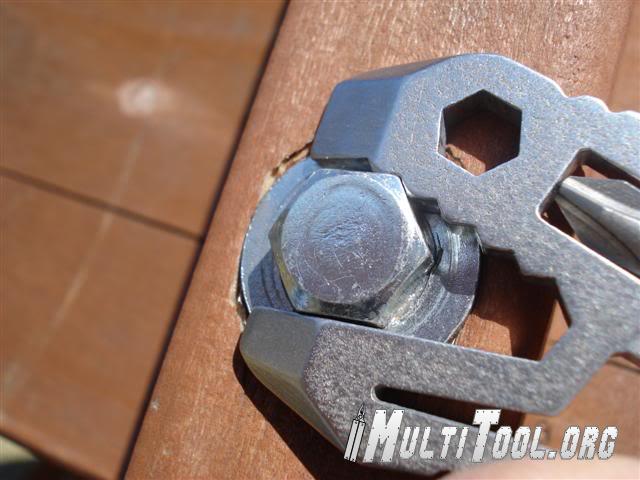 In the world of pocket tools one thing is more prevalent than all other features; the ability to pry stuff with them. Due to the size of the Piranha the tool is quite good in this respect. The thickness of the steel mixed with two different ends makes it a joy for opening paint cans, stuck windows and things of that nature. The open end of the wrench has quite a steep angle and is good for really heavy duty prying while the other end is more subtly angled and features a nice broad surface which works real good as a scraper. I have used this end more times than I can count for scraping gunk off the floors at work, removing tape from windows and other nasty things. Most pocket tools have an angled pry end but not many feature two of them, let alone one that can multitask like this one. 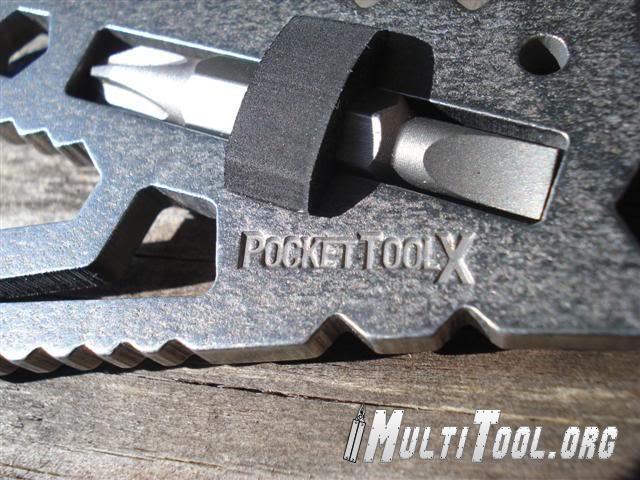 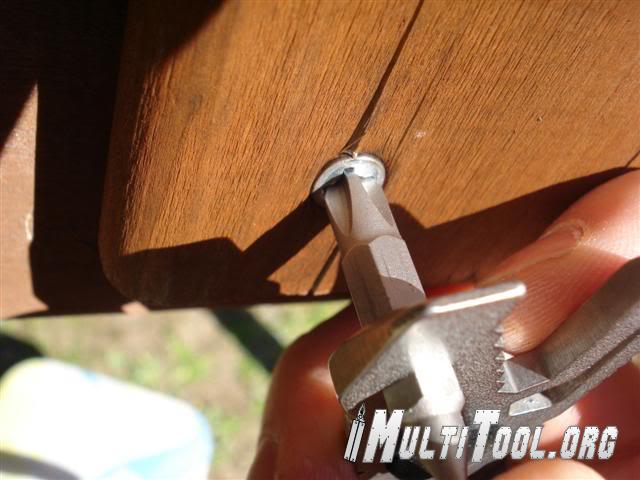 A feature which most pocket tools don’t have and I feel should all have is the ability to drive Phillips and straight screws. Most pocket tools make kind of a compromise and can turn both styles using their pry end. This tool has a dedicated double ended bit that is held in the body of the tool by a piece of neoprene. You would think that wet suit material would be an unlikely candidate for a pocket tool material but it works out pretty good. At first the bit is held in so tight you really have to tug hard to get it out; but it loosens up with use. Getting the bit out has a trick to it but I mastered it in a short amount of time. To use the bit you place it in the hex opening on the end of the tool near the open end wrench. I thought it would be a pain to use the screwdrivers because nothing would hold the bit in place while you were using it, but the bit is long enough that you can hold it in place with your thumb so it does not slide or push back on you. The arrangement of a #2 Phillips and a #7 flat is a good pick for drivers since those seem to cover the basics and most folks don’t need more than that. The drivers work well and it’s good to see another pocket tool manufacturer include drivers as part of their overall package. 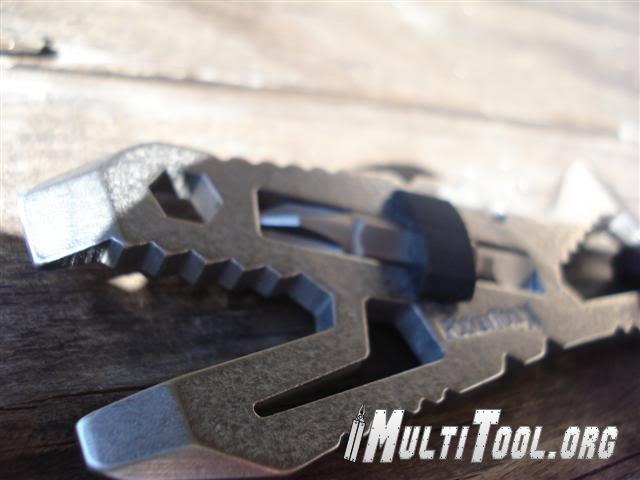 Two honorable mentions I can also tell you about are the nail puller and the bottle opener. The bottle opener works rather well, with some pocket tools its more of just a thrown-in addition and sometimes opens bottles rather poorly. The bottle opener works pretty well but is not as excellent as some of the others out there. The nail puller is rather interesting. It does indeed work well as it is intended but the circumstances have to be right. The nail not only has to be thin enough to fit in the slot but also has to have enough of a head to facilitate pulling the nail out. This feature does work but seems to be dropped from a future release of this tool due to it being somewhat ineffective.

In conclusion, it’s nice to see a company who is fresh on the scene be able to jump right in and offer us a great product. The Piranha is not without its faults and I am sure as the company grows and produces more tools they will only get better. It truly is nice to see a company make pocket tools equal material wise to those produced by custom makers and offer it to folks at an affordable price. I look forward to what else MK7 has up their sleeves this year and you can check them out at pockettoolx.com.