Digging through the small pile of obscure pocket tool makers, there is one guy in particular that makes you stand up and take notice. Brian Flud of Flud Unlimited is a custom knife maker who also seems to dabble in the pocket tool category as well. Most pocket tool makers seem to focus on a particular theme when they design a tool. They tend to swing from tools with a pry end or those with a wrench, sometimes even a bottle opener thrown in for good measure. Brian seemed to focus on something completely different; he instead designed his tool with a can opener as its primary function. Think of a military P38 on steroids and that is what the Flud tool is like, he takes the basic function and ramps it up to a tool that chews up cans and spits them out. 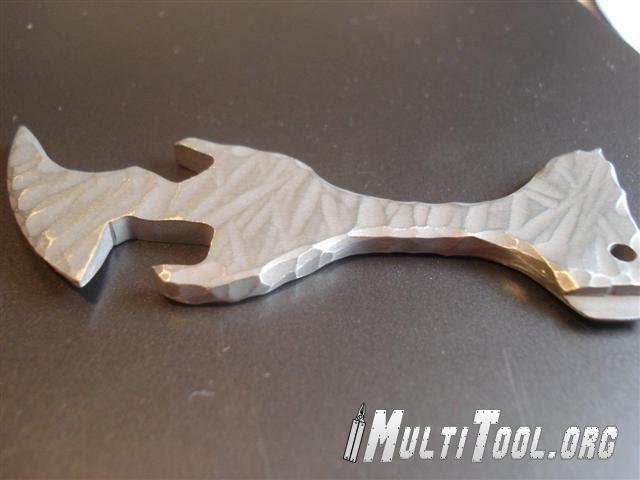 The P38.5 as it's called is a rather drastic and very artistic way to upgrade a time tested tool that many folks already have riding on their key rings. The P38.5 is made out of a solid piece of titanium and sports several features that will keep you coming back for more. The primary job as I mentioned for this tool is opening cans and it does it quite well. I was originally skeptical because I was not sure how titanium would how up to the repeated stress of opening tin cans. I of course was quite wrong, I have been putting the P38.5 to use for several weeks now opening cans where needed and even though it's rather messy it does indeed make short work of whatever canned good stands in your way. 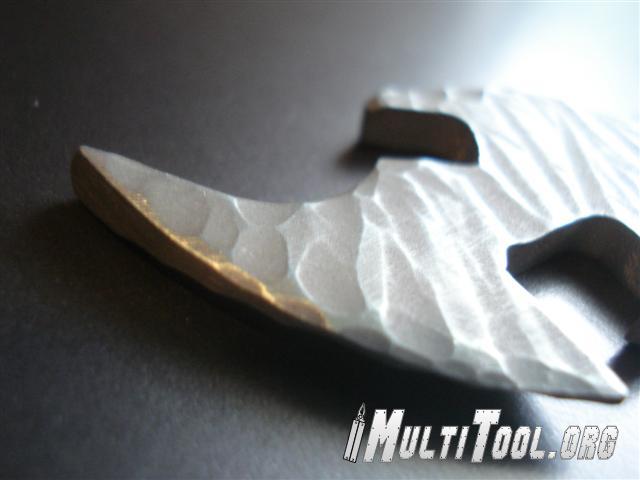 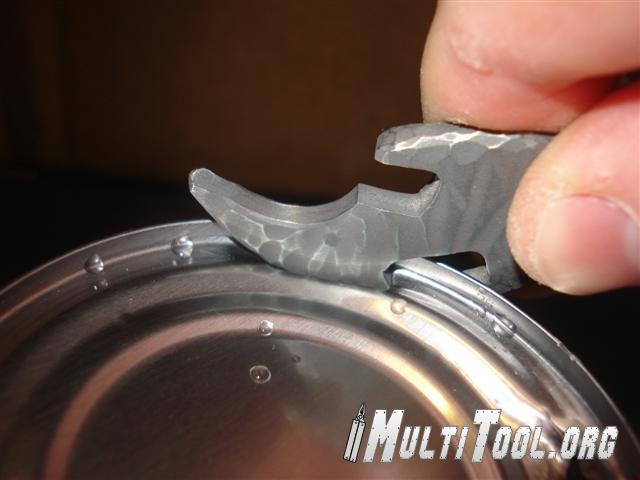 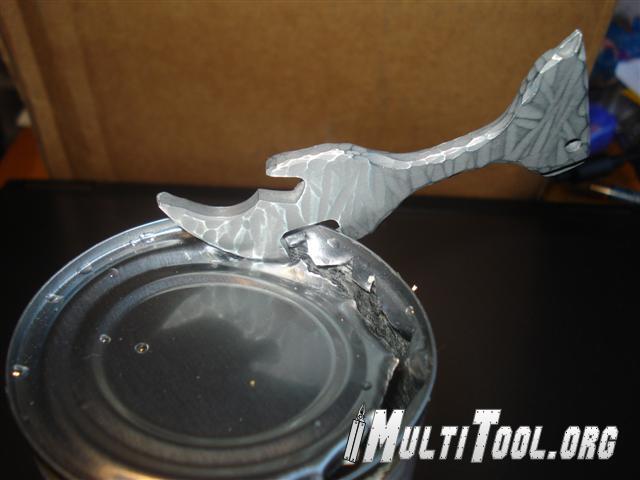 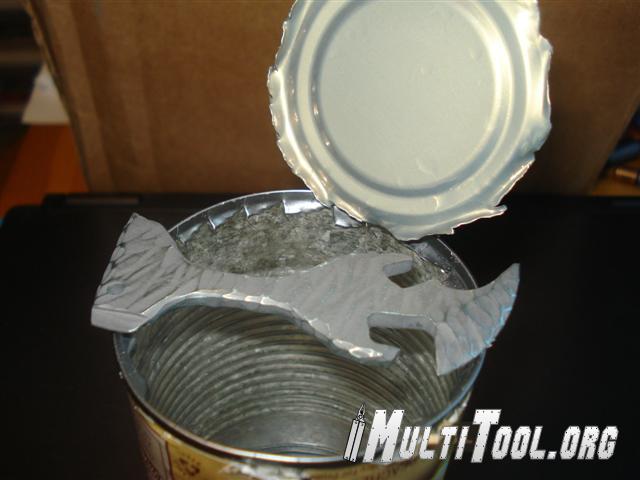 Second in line and just as impressive is the bottle opener, with its unusual design (pretty much like the rest of the tool) it got me wondering how well it would perform this task as well. I was surprised to see that the P38.5 is so good opening bottles I wonder if the JDR products now have competition for being the best in the business. The cutout on the bottom grabs the lip of the cap just every so perfectly; the long nose of the tool presses down on the opposite side of the cap to provide just the right amount of force to keep that end of the cap in place until the cap is lifted.

What sets the P38.5 apart from anything else in the custom field is the addition of a fixed Phillips and flat driver on the tail end of the tool. As you can see from the pictures in this review, the P38.5 resembles a shark. Granted it looks like a somewhat mutated version of one but the look is there none the less. To keep with the flow of the design and maximize what tools were available on the P38.5, Brian set both drivers offset from each other on each one of the supposed tail of the tool. The Phillips is not something you normally see in custom pocket tools, the only tools out on the market today that feature an integrated Phillips like this is the pocket pry tools by Gerber. The Phillips is exquisitely ground and you can tell care was given when ensuring this driver would fit those number two screw oh so good. The flat head driver on the other end is somewhat of a paradox. Most pocket tools feature a pry end that is not only suitable for prying but also functions well as a heavy duty flat driver. The P38.5 on the other hand has a very thinly machined driver and works well on things that don't recall a lot of torque. I have tested both the Phillips and the flat on a variety of screws and have not noticed any flex or marring of the titanium in any way. 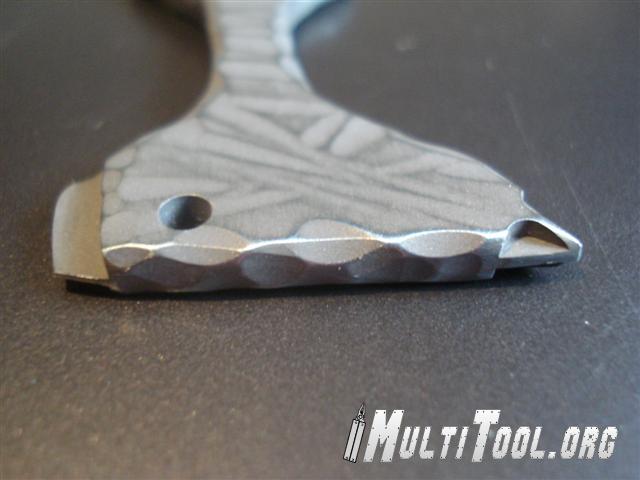 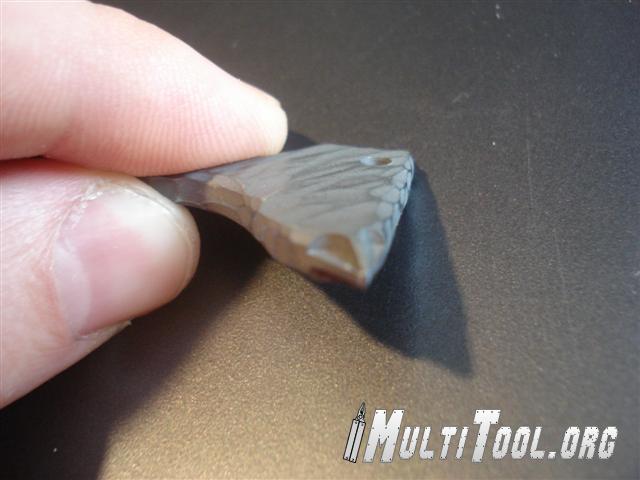 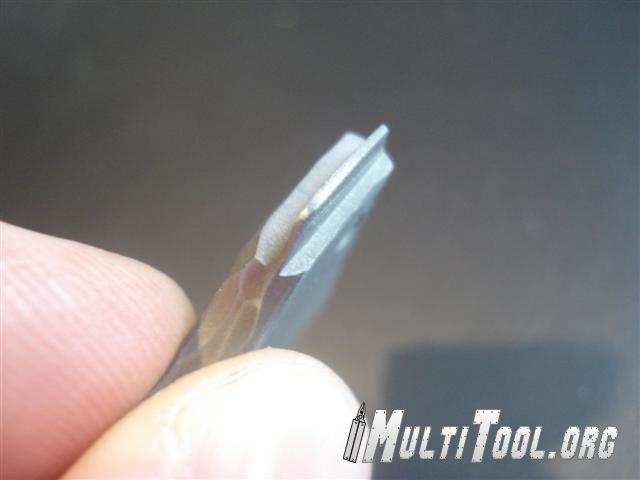 This particular version of the P38.5 features a chipped stone finish that is quite different visually and gives you some tactile feedback when using it. Most other custom pocket tools feature a smooth finish and have jimping in some areas. Due to the style of finish, the whole tool can be gripped quite well with little fear of slipping at the wrong time. My only complaint about the P38.5 is the overall size of the tool. It can be carried on your key ring but I personally feel it's kind of on the large size for that method of carry. Instead I carry mine in my pocket loose, it works OK but there is a tendency for it to poke your leg due to its unusual design. 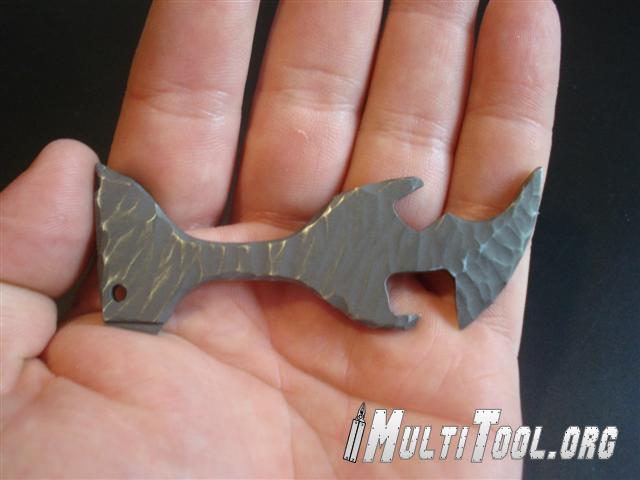 Brian Flud's P38.5 is something so radically different from mainstream pocket tools that one has to step back and notice it as not just another pocket tool but a piece of artwork. Brian really cares about his customers and has even produced some custom version of this tool to suit their needs. It's nice for someone to break the mold and go in a completely different direction from what you normally see and it's a welcomed change. If you are in need of a good can opener with a few extra goodies added in; or if you just dig titanium pocket tools check out the P38.5 from fludunlimited.com