For years the Leatherman Crunch has been the only player in the folding, locking plier head category- many other companies like Kershaw and Schrade have tried locking plier tools, but none seemed to be that successful, leaving the Crunch the only one available to anyone needing a locking tool. Gerber has now thrown their hat in the ring with a locking plier tool, which also incorporates Gerber's traditional sliding head to boot! 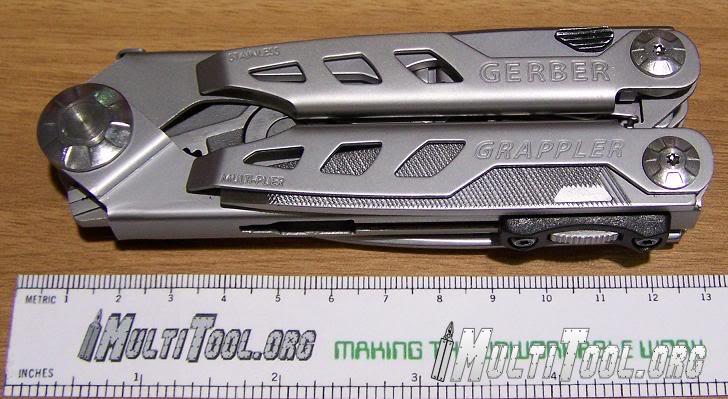 Gerber's challenger is called the Grappler, which, to me at least, conjures up a big muscular wrestler- fitting, because the Grappler is somewhat larger than the Crunch, and built like a brick.... you get the picture.  Luckily the Grappler showed up from www.RockyNational.com just as I was doing some renovations on my house, and I was able to give it a pretty solid workout over it's first week out of the box. I drove it hard and it didn't disappoint.

The locking head clamps onto objects very securely- at least with as much force as any other locking pliers I have owned in the past, and adjusts with a small screw in between the handles, making the Grappler a most unique design. And, the head design still incorporates the anvil style cutters, although I would like to see the replaceable carbide cutters on this model- really, I'd like to see them on all models, but that's just me being greedy!

The head slides in and out easily- in fact, more easily than any other Gerber I have used, likely because of the increased mass of the head and locking assemble, which all slide into place together. The head locks in the extended position and is released with a button on the only slider. I wish the head locked in the closed position too, but that would negate the typical Gerber flicking action to deploy the head. I have found that when stored head down in the sheath, the head usually extends when drawing it, which is handy if you want to use the pliers, but not so much if you want to use any of the other tools as it means you'll need to put the head away first.

Using the locking plier head isn't as intuitive as with other locking plier designs- since the screw is in the middle rather than on the end as it is with other designs, it can be a bit confusing at first, but after some use I found myself getting used to it. It's still not as natural as the others, but then I've been using that style for 30+ years, and the Grappler for a few weeks. Given time, I don't see it as being a problem.

The jaws also don't open as wide as the Crunch or other discontinued models, or dedicated locking pliers, but I find that it opens wide enough for everything I used it on. In fact, the only time I found it didn't open wide enough was when trying to change a shower head. The Crunch barely managed to lock on to the shower head, but didn't have the leverage to unlock it, and I had to call in an actual pipe wrench to finish the job, so I really don't see that as a failure on the part of the Grappler.

Despite it's larger than average size, the Grappler has relatively few functions. Since the plier head takes up all of the interior space, there is only room for other implements on the outside of the handles, similar to the Leatherman Wave or Gerber's Flik. The first slot is a liner locking, partially serrated, one handed opening blade. Even after the drywall dust and industrial adhesives the Grappler was subjected to during the renovation, the blade opens smoothly and locks up solid. It has a nice elongated spear point that I have to say I would appreciate in a folding knife, but I'm not so sure I appreciate in a multitool. Still, there weren't any fragility issues when I used it to score polystyrene sheets for a tub surround.

On the opposite side of the same handle is a double sided file with a flathead screwdriver tip, which also locks open- in fact, all the tools use a liner lock mechanism to lock open. Usually I'm pretty leery of screwdriver tips on files, as a file has to be heat treated very much differently than a screwdriver, so usually one or both suffers. Long term testing will tell for sure how this performs, but the painted over screws I subjected it to provided a significant amount of resistance, and the screwdriver held up without a problem.

Opposite the nail file is a combination wire stripper bottle opener and phillips screwdriver all rolled into one. The wire stripper is the notch type and seems to work about as well as I've ever managed to get one of these types to work. It's not ideal, but it'll work in a pinch. The bottle opener is functional, as is the phillips, despite being one of those flattened phillips heads Gerber is known for. I don't find it all that bad, but others really have issues with it. Like everything else, it may not be the best, but it is functional when nothing else is available.

In the last corner is a pry bar with a ruler printed on it. I had serious misgivings about this pry bar due to pivot points and that stainless is not usually a good material for prying. However, it pulled small nails and opened paint cans, even those partially sealed with dried paint with no problem at all. I'd expected it to bend or break during some of the duties I tested it on, but it took everything I threw at it.

The bottom line on the Grappler is that it is a tough, effective tool, and a decent contender in a very small category. I think it's about time that someone else decided to give the Crunch some competition, and I can say that the Grappler is as tough as any other tool I have used. Like any tool it has it's faults, but the Grappler is still a very capable tool.

More in this category: « Gerber Splice Review Gerber Octane Review »
back to top
Interested in this or a different tool and still have more questions?
Why not join us over on the Multitool.org Forum where our community can help you find what you're looking for!