In the most basic definition of the term, the Buck Metro could be considered a “multitool” since it has multiple functions.  Or, at least a dual purpose. 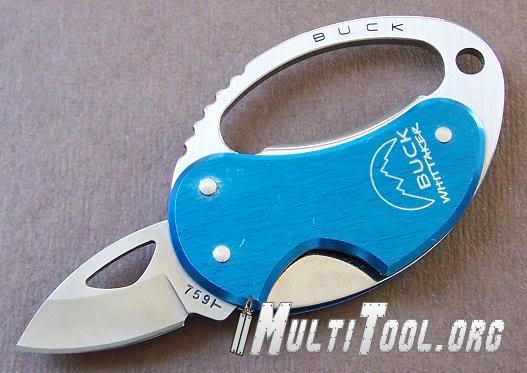 Available in several different colors (red, blue, green and black and now in several patterns) the Buck Metro is basically a small keychain knife with a built in bottle opener.  One can’t help but think that Buck could have made a knife and bottle opener in a much smaller package, or that they could have installed more features into the ample frame it does have.  Even an exposed flathead screwdriver would benefit the Metro.

As far as the small, one handed opening blade goes, it is reasonably functional although there’s really nothing special about it.  At less than an inch long, it is quite non-threatening, so it should be acceptable in just about any environment.

The main part of the Metro is the bottle opener.  I’d prefer if it had some other function, say as a carabiner or something, but it is just a bottle opener- an extremely large bottle opener.  It is at least functional at that,  but it’s orientation is such that there isn’t a lot of leverage.

The bottom line is that the Metro is a nice trinket, suitable for keeping in a drawer or on a desk until it’s needed, but I don’t see it having enough function for an Every Day Carry (EDC) type tool.  It is cute, has a large engraving surface, and bright colors, and might be suitable for a purse or as a corporate gift item, but it is limited.  The blade is too small for most tasks, the bottle opener is a bit awkward to use, and that’s all there is to the Metro.