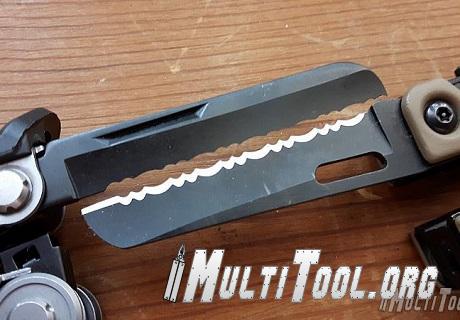 To continue our epic battle between large sliding head plier tools from both Leatherman and Gerber, today we are looking closely at the blades.  Since both tools feature plain and serrated blades, we thought we would put them together and see how they stack up.  Since blades are among the most used functions on a multitool we thought it was only fitting to dedicate an entire battle to just them.

As we begin, both the Center-Drive and the One Hand Tool (OHT) are tied at six points after Leatherman's early lead in Part 1 and Gerber's almost total domination in Part 2.  Both tools are going to try to pull ahead today, as the final challenge is tomorrow, and time is running out! 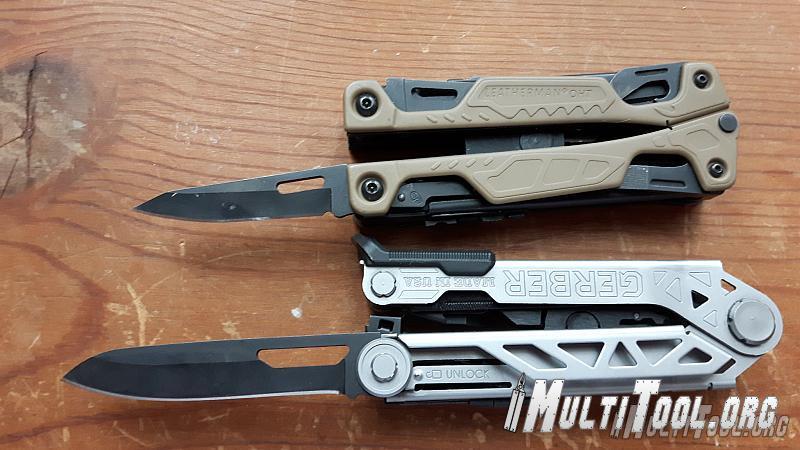 Both the Leatherman OHT and the Gerber Center-Drive feature one handed opening plain blades and serrated blades. Each blade came very sharp, and all four are similar varieties of stainless.

There are a lot of similarities between these two blades- both are one handed opening with holes , both open smoothly, both have a dropped point blades, and both lock open with a satisfying click of their liner locks. 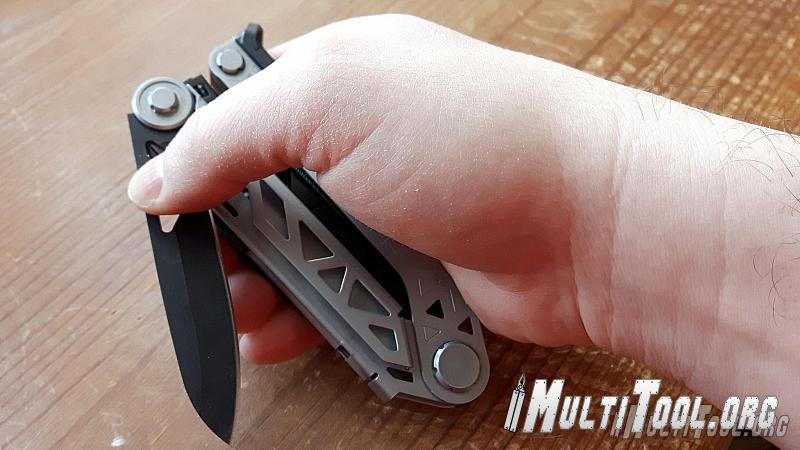 However, there is a very noticeable difference in size between the Center-Drive's 80mm blade and the OHT's 60mm one. If you don't know how big 20mm is, and it isn't obvious from the photos, that's roughly the width of a thumb. Also known as a HUGE difference. I don't see how I could not award this point to Gerber, and honestly, you shouldn't be very surprised about that. 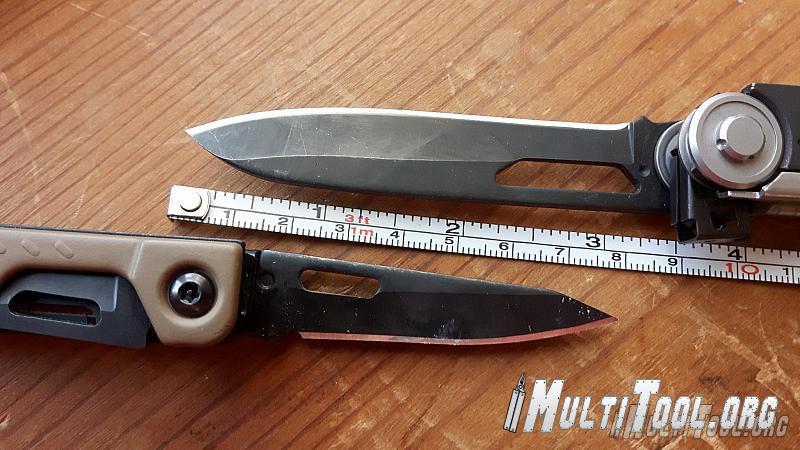 But, if I'm being honest, I find the Center-Drive's blade a bit too large, and I would rather see it a bit smaller- but then I would also like to see the blade on the OHT a bit bigger. If I'm being totally honest, I would really like a blade somewhere between the two, but I'm still giving that point to Gerber and there's a simple reason why. 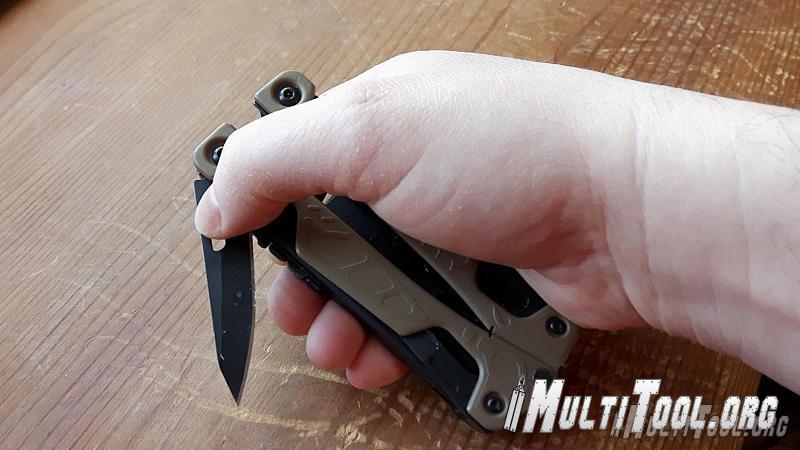 It almost seems like Leatherman put it there as a joke. Surely they could have eliminated one of the flatheads and put in an actual blade worthy of such a large tool.

The serrated blades on each also follow very similar lines- both are sheepsfoot blades with similar serrations- one large scallop, two small scallops and repeat. 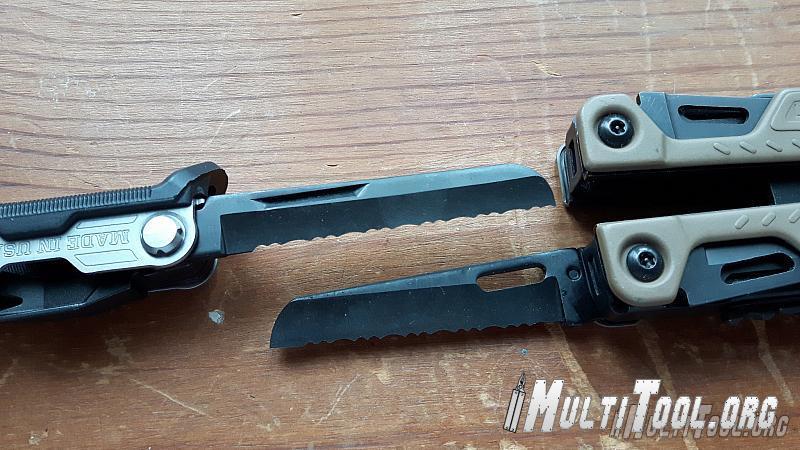 But, there are large differences between the two- the most obvious being that the Leatherman serrated blade is able to be opened from the outside, while Gerber's is tucked inside the handle. The OHT's serrated blade locks open with a liner lock, identical to the one that holds the main blade open, and the Center-Drive's blade is held open by Gerber's SAF-T-LOK system.

But, while it appears that the Leatherman is a serious win for being accessible outside, but not all other things are equal. For example, the OHT blade is at the thicker end of the handle (Pivot end where the pliers are is thinner) and is one of the “left hand” accessible blades. That means that right handed people will have to access it in one of the following ways:

The first method negates the one handed opening features of this multitool, and the other two methods potentially compromise grip. 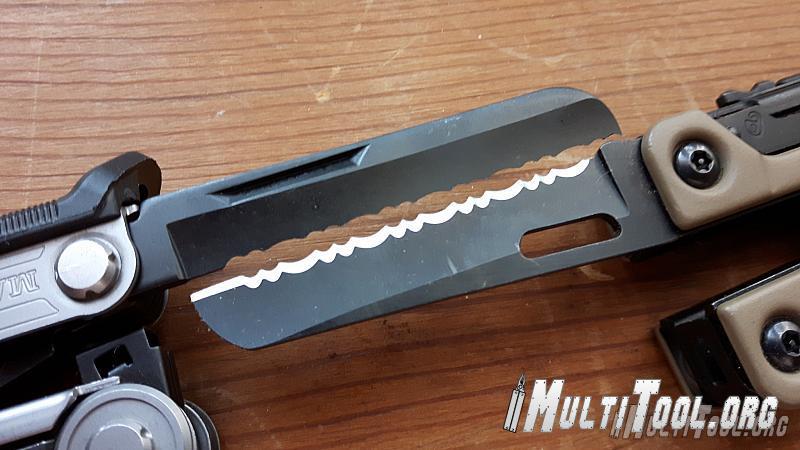 Putting a further nail in the OHT, the Center-Drive's blade is slightly longer, providing more cutting area, and, as I said above, I do like a bigger blade.

I want to call this one a draw, but in the end, I have to give the point to Leatherman here. The blade on the Center-Drive is just not large enough to justify the extra amount of effort necessary to slide the plier head out, open the handle and extend the blade, then closing the handle and sliding the plier head back in to use it, then repeating the whole mess to put it away.

But, there's one other major issue to the serrated blade- it's on the wrong side. 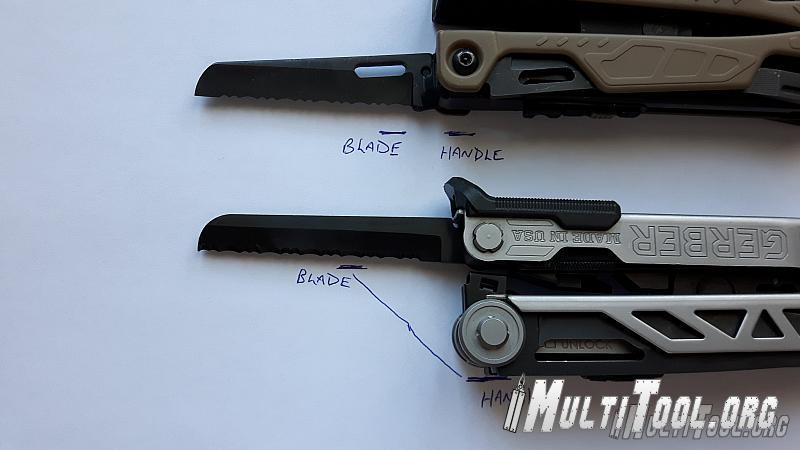 If you assume that there's a 45 degree angle coming out of the lowest point of the handle and contacting the blade, you notice a HUGE discrepancy, and the lower handle gets in the way of cutting. The Center-Drive blade may be bigger, but it isn't that much bigger.

Many years ago, Victorinox used that as a metric when promoting their new line of plier tools, with outside accessible blades that were flat, versus the inside the handle blades on Leatherman models. It appears that Leatherman has learned that lesson well, and used it to score.

At the end of Round 3 the score is still tied between them. Personally I am still on side with the Gerber Center-Drive, but, being objective, even I have to admit they still seem very well matched. The serrated blade competition, when taken solely on the blades themselves would have been awarded to Gerber for being slightly larger, but the relative inconvenience of access really hurt it. Leatherman didn't so much win that point as much as Gerber lost it.

Tomorrow will be the fourth and final battle, with both contenders going into the fight confident. Any advantage that one has over the other may be enough to pull off the overall win, but with the score still tied, it is anyone's match.

And yes, I have been resisting the urge to call this part "The Rumble with the Thumbhole."  Say it outloud.  I dare you not to laugh.

To complain about the above joke, check out our forum!  Otherwise, I will see you here tomorrow for the Sudden Death Finale of this nail biter!

More in this category: « OHT vs GCD Pt II Grande Finale! »
back to top
Interested in this or a different tool and still have more questions?
Why not join us over on the Multitool.org Forum where our community can help you find what you're looking for!