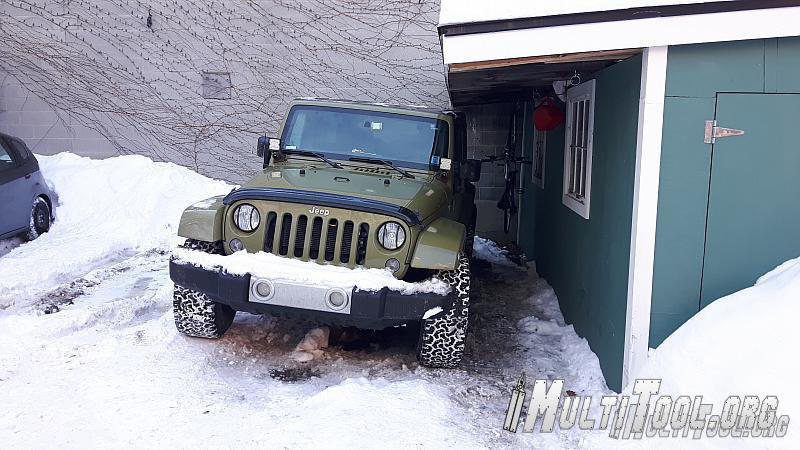 You often see those silly little folding shovels from Gerber and SOG, the generic cheapos in Army Surplus stores and eBay and you wonder just how good they are? I mean they are probably okay in sand and soft dirt, but really, what good are they when things get hard? And yes, I mean hard, not difficult. Specifically, I mean rock hard, packed down, super frozen ice. The kind that starts as water (duh) then freezes, then has a huge weight placed on top of it, is occasionally warmed up slightly and refrozen until it is as dense as it can possibly get. In Canada we call it simply "winter." 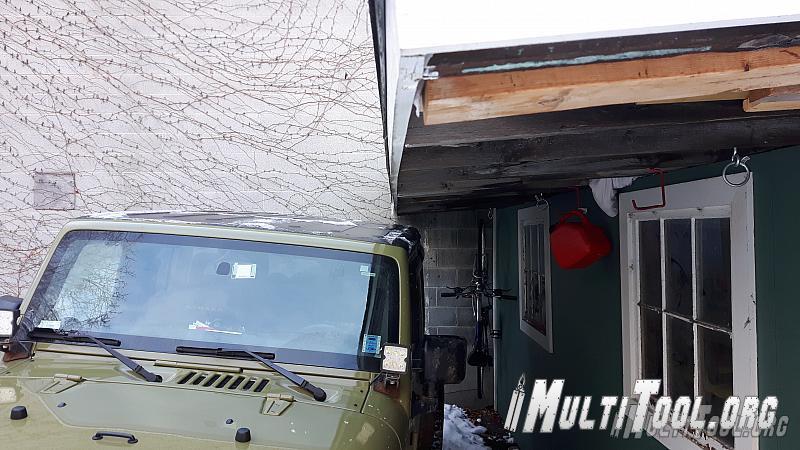 I decided to give the Gerber Gorge folding shovel a bit of a workout and see just how much it was up for before it cried for mercy. As you can see in the above photo, we have a decent amount of snow, and I park my Jeep under the overhang of the landlord's garage. If you look closely, you can see there's not much clearance between the top of my Jeep and the overhang. 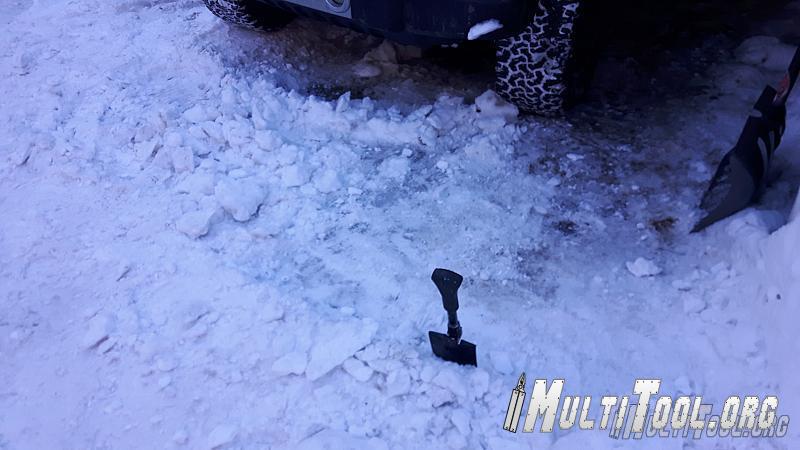 There's only about four inches in between, which is bad when there's 4-6 inches of compacted snow and ice underneath- as I drive out I run the risk of damaging my fiber glass top and the overhang of the garage, and neither of those is a good thing. So, I need to dig out around my parking space so I don't have to keep parking as wide as you see in the above photo and annoying the guy who uses the space I am currently hanging over in. It's a serious job- I hope the Gorge is up to it, because all I have for a snow shovel is a pusher type with a plastic blade, and it is no good at all for chipping ice or packed snow!

It helps if you know how to use one of these small shovels- and yes, there is a technique to it. First off, you have t be on the ground. I find getting on my knees works best- at my age that is often painful, but luckily for now this job comes with built in ice packs, so I'm okay. 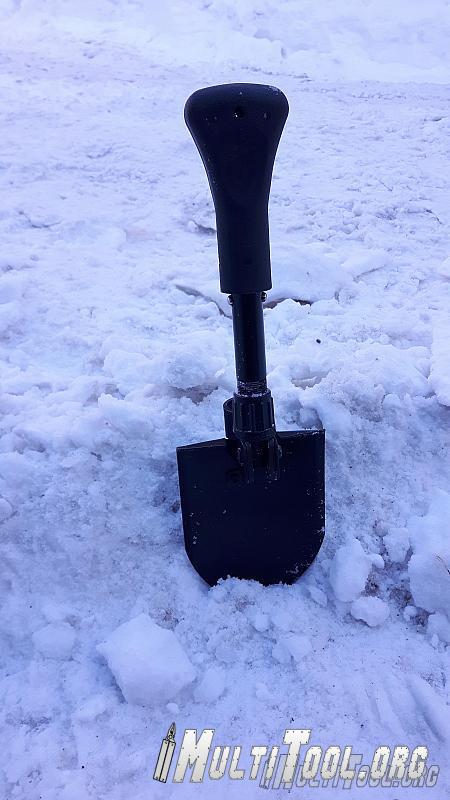 Once you are down, grab the shovel with both hands (one on the shaft, one on the end) and ram the blade down repeatedly into the snow and 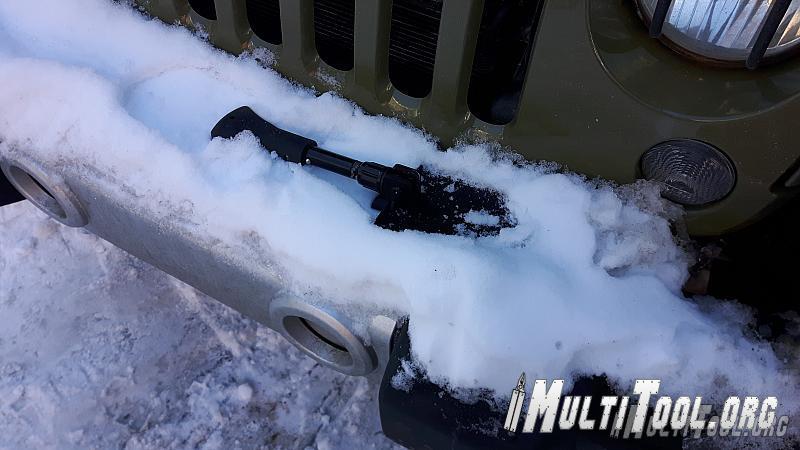 ice (or sand or dirt, whatever you are digging into) to break it up, then scoop it out with the shovel. It's actually very effective when used this way, and as you can see, it dug in quite deeply over and over again. The only drawback was that after repeatedly striking the hard ice, the hand that was over the butt of the shovel started to hurt.... but then what do you expect when you repeatedly hit something hard? It's not the shovel's fault, and in fact the shovel was up for a lot more, as the edge of the shovel didn't even get dinged, and at no point did it feel like it was going to break, collapse or fold. My bones were a different story!

As you can see, the Gorge was excellent at chiselling away a lot of hard packed snow, and I was able to clear a large area with relative ease. Yeah my hands hurt a bit, but kneeling allowed me to keep my back almost completely straight through the whole thing and so I am not as worn out as I could be after an activity like that.

In fact, it is such an excellent Jeep accessory, it looks like the Jeep was built for it! 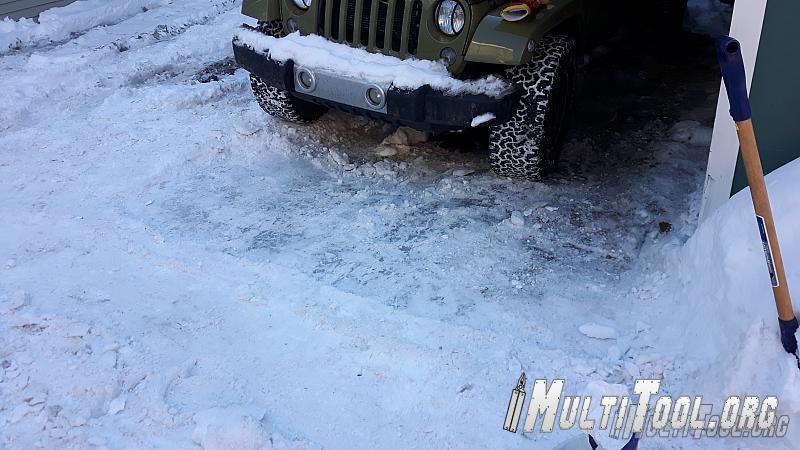 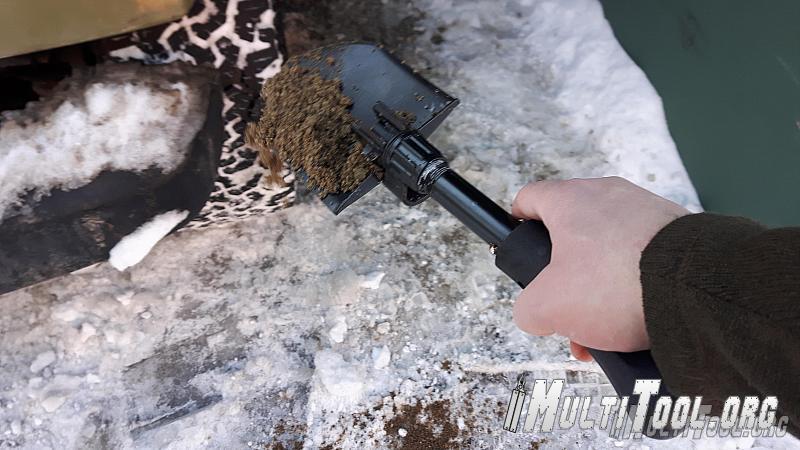 Since I'd only gotten some of the snow up and the ice was still underneath I figured I would put down some sand for traction, and again, the Gorge helped out nicely so I didn't have to get my hands dirty. You may not know this about me, but as I worked in a lot of restaurants in my younger days I am a compulsive hand washer, and I can't honestly tell you how much I appreciate an opportunity to not get too dirty... 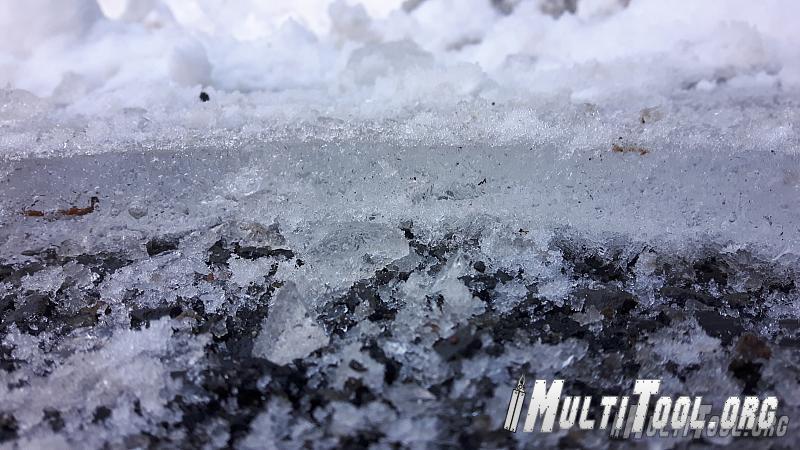 Now that I had some decent traction I could move the Jeep out of the spot and start cleaning up the sides of my parking space- and let me tell you, the hard work was just beginning! You can see from the above picture just how thick the ice was under the snow- and how solid. The ice was just over an inch thick, plus the hard packed snow on top. The only reason I managed to break the ice here is because it is right under where the hot engine is when I get home.

After using the Gorge to break up the hard packed snow and some of the ice that would cooperate, this is the mess I was left with. I decided this was a good time to switch tp the pusher shovel, as moving several hundred pounds of snow with the tiny blade on the Gorge was far beyond the amount of sanity I had left for this job! 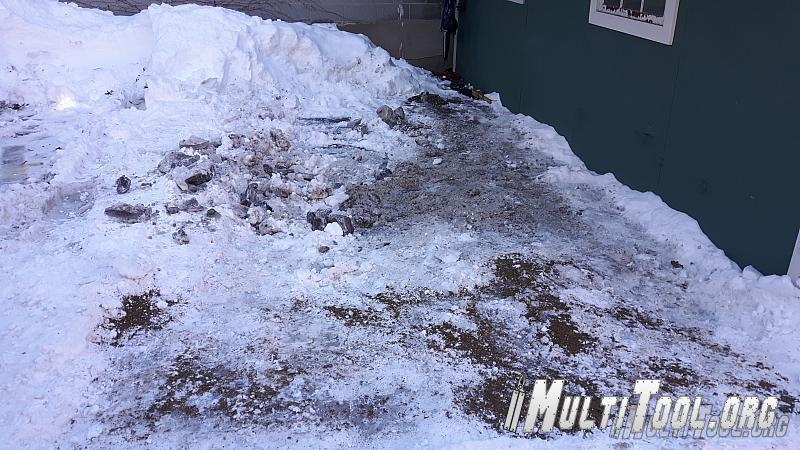 Even with the pusher it was a bit of work to move it all, but it was a lot easier than the alternative! Once the broken up hard packed snow and ice chunks were moved you could get a sense for how deep the Gorge was able to dig. 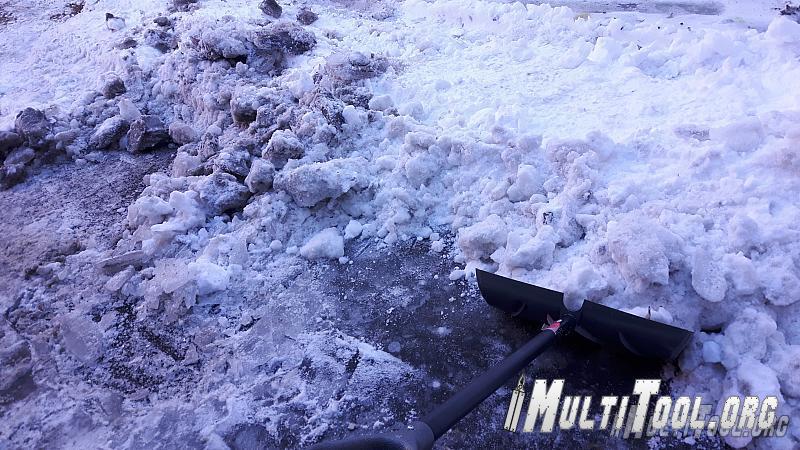 Not too shabby for a little folding shovel, is it? :pok:

Especially when you consider that every time it was thrust in, it hit some very hard and very unyeilding ice or, in some places, the frozen asphalt underneath. This little shovel is a beast in a very small and convenient package, and at no time during the process did I think it wasn't up to the task. Here's the finished space: 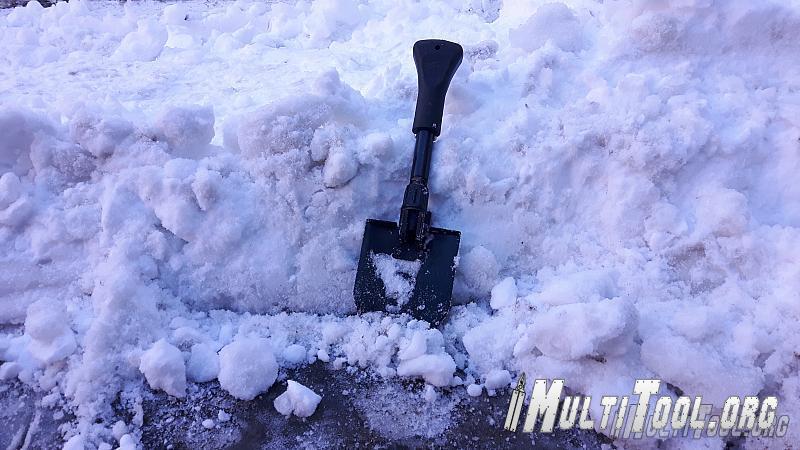 Not too shabby indeed! Congratulations Gerber, and thanks for making a shovel that is as tough as a Canadian Winter!

More in this category: « What I Don't Like Gerber Vs Leatherman »
back to top
Interested in this or a different tool and still have more questions?
Why not join us over on the Multitool.org Forum where our community can help you find what you're looking for!