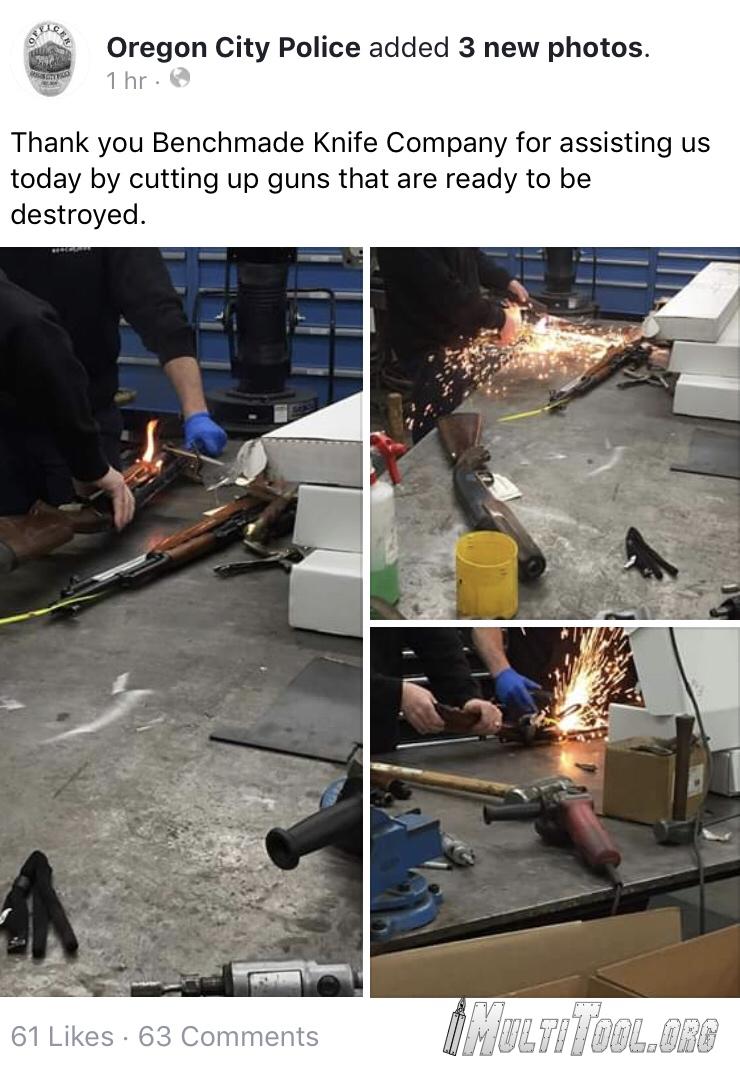 Benchmade is the subject of the latest online protest, and they can thank the local police for for it.

Oregon City Police tweeted a photo a couple of days ago attempting to promote Benchmade Knives as a good corporate citizen by helping the police destroy some firearms.

Naturally this created an uproar among the firearms enthusiasts that would have rather had the guns sold to collectors and other responsible firearms owners rather than see them be destroyed. Even further, there is a call to boycott Benchmade products to protest their alleged anti- Second Amendment policies based on their willingness to help local law enforcement and for contributions to an anti-firearms leaning politician:

After the Oregon City Police realized what had happened, they released a second statement attempting to stop the mania they had inadvertently created and explained that these firearms were unable to be resold, either because they had been used in crimes or because they had been surrendered by people who wanted them destroyed. 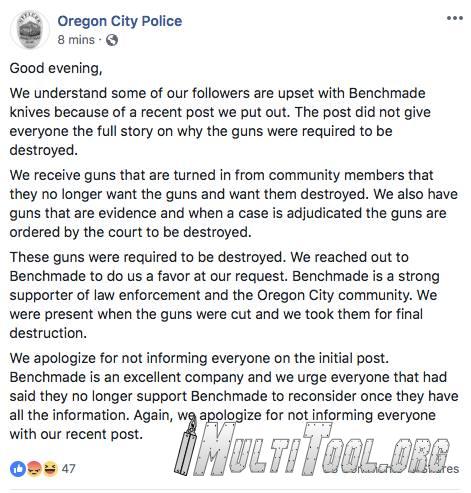 Benchmade has also made an official statement:

Benchmade is aware of the recent post from our local Oregon City Police Department.

We apologize for the confusion and concern that this post created. These were firearms that the Oregon City Police Department had to destroy in alignment with their policies. Oregon City Police requested the use of specialty equipment within the Benchmade facility to follow these requirements, and as a supporting partner of our local police force, we obliged the request.

Benchmade is a proud and unwavering supporter of both law enforcement and Second Amendment rights. These are commitments that we do not take lightly and will continue to support well into the future.

But, as anyone knows, facts will never be an acceptable argument to stop online hysteria, and this statement doesn't seem to be slowing down the number of people offended by this. The boycott is expected to last until another dentist goes hunting in Africa, or until someone's kid is endangered by an animal at the zoo or on a golf course.

At this time, Harambe could not be reached for comment.

My opinion? Well, I have a lot of them. I won't be boycotting Benchmade for helping law enforcement, although I do sort of wonder about the sense of funding a politician with anti-firearms leanings when you own the license to produce knives with firearms company logos on them.

"Scandals" like this are nothing new, and in fact have hit companies that we are very familiar with here at Multitool.org. There was some uproar years ago regarding Tim Leatherman's political leanings, despite them manufacturing firearms tools like the MUT and hunting tools like the Vista, Rail and Pump, and archery related tools like the Cam.

However, let's also recall that these companies are based in Oregon, traditionally a Democrat leaning state and it makes sense to curry the favor of politicians that wouldn't take much of push to go against you, so I don't think I am too upset by much of this.

I am all for folks being upset about this, and if you want to stop supporting Benchmade because of this, by all means, go for it. Consumers have the right to vote with their wallets, and if enough people feel this way then Benchmade will either change or go out of business. It is evolutionary.

Personally I don't agree with condemning a company for complying with local law enforcement, and I also have to believe that Benchmade's marketing staff were probably unaware that the police were going to post these photos. I feel like they would have foreseen some backlash and asked that they not be posted, and if they did know then they deserve all of the overtime they are experiencing on Damage Control now.

Bottom line is this- Benchmade did something lawful and aided the police force. If you don't like the law that allowed (required) this action to take place, put your money and effort into changing the law.

I am not going into my thoughts on the political process because that is a whole other ball of wax, but there's a better chance of accomplishing something by contacting these places than there is by grinding up your own property. That makes about as much sense as destroying your own car to protest drunk drivers or melting down all of your spoons because you are fat.

And, in the end, Benchmade was just doing a favor for a local police force. You can get upset over this if you like, but IMHO there are much more important problems in the world today.

If you have any questions or comments on this or anything els eyou see here, please feel ree to email me at This email address is being protected from spambots. You need JavaScript enabled to view it. or have your say on our forum.