Back in the golden age of multitools; we'll say late 90s early 2000s there was a lot of manufacturers getting in on the game. Everyone from Buck to Kershaw was producing a multitool and some of the designs were very forward thinking.  Schrade cutlery was one of those companies and they produced what they called the Tough tools. Both the Tough Tool and the Tough Chip did well for the company and we're proudly made in the USA.

Schrade had some financial struggles and was purchased by Taylor Brands LLC back in 2004. Taylor kept a lot of the lines alive that Schrade had such as Old Timer and Uncle Henry. Manufacturing was moved overseas and we saw quality control take a dip. Schrade continued to manufacture the Tough Tools but they don't have the durability of the once famed brand.

In the first quarter of 2016 Schrade brought some new products to the market which included some multitools. One of those new tools was the Schrade ST11. The ST11 or Schrade Tough Tool Multitool; is an interesting new take on an old design. 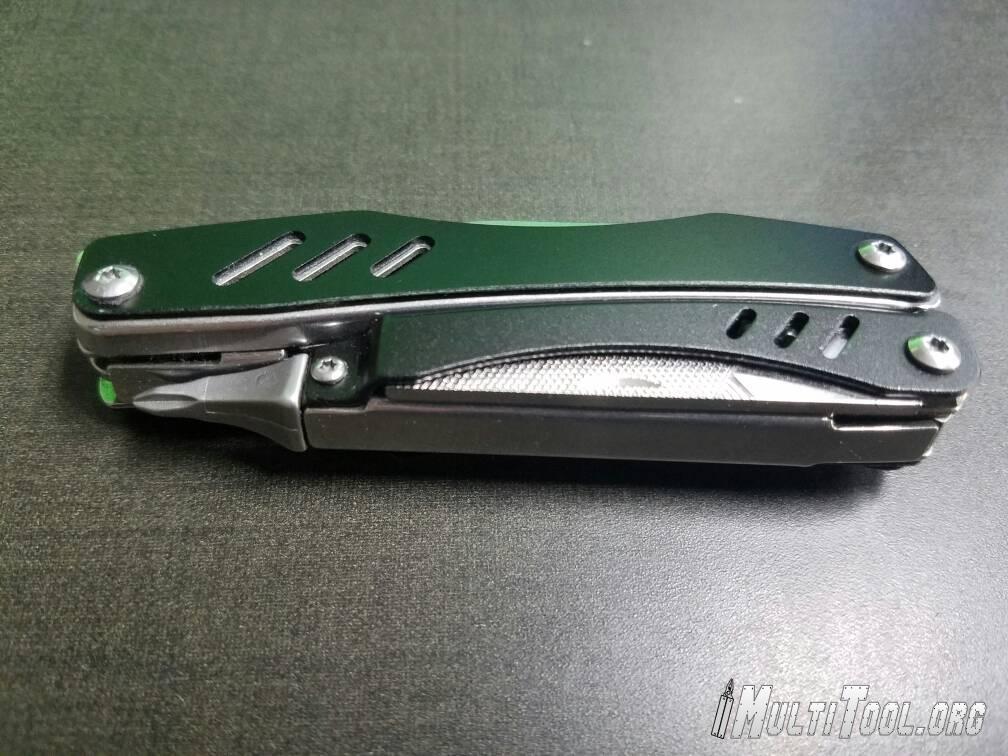 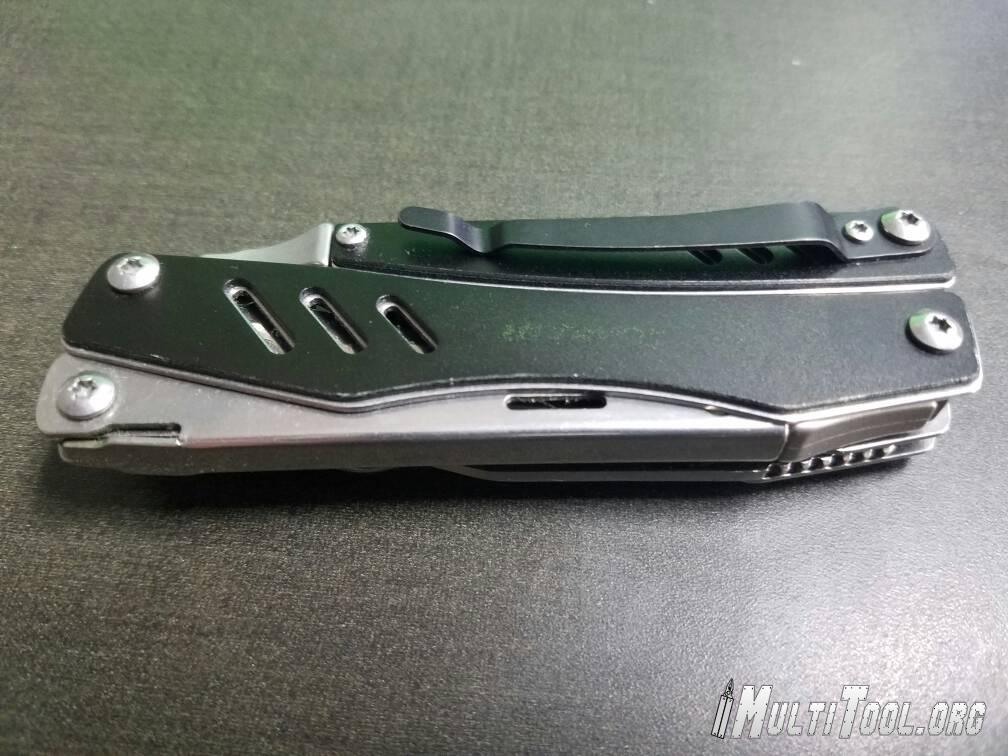 The tool in the closed position has two tools that are accessible without opening the tool. There is a 2.84 inch blade that is opened via a cutout in the blade and is held in place with a back spring similar to a traditional pocket knife. The blade features a nice clip style blade and is made from 2Cr13 stainless steel. The blade is easy to sharpen and holds the edge pretty well. 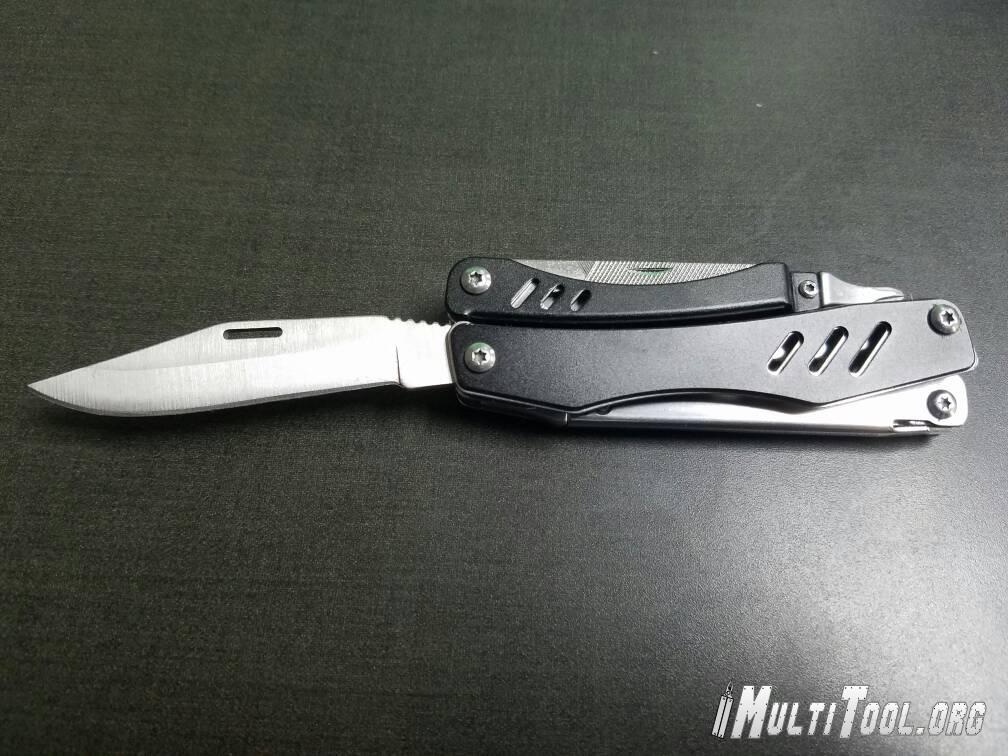 Also available from the outside is a metal file. The file has a one directional pattern on one side and a cross hatch on the other. The file also incorporates a bottle opener on the underside. The file doesn't work real well due to its hatch being shallow and steel not being hardened well. I would have liked to have seen a carbon steel used with a deeper hatch to make it more usable. The bottle opener works decent for the placement on the tool, it's kind of hard to mess up a bottle opener but it happens. 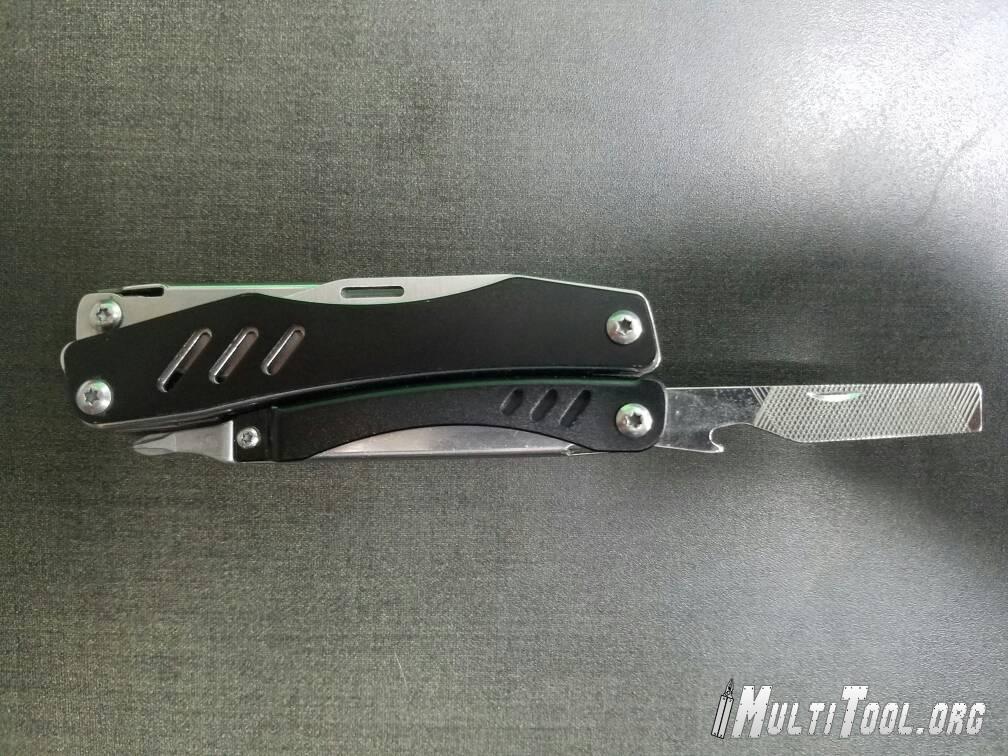 Departing from the standard butterfly design, which features a pair of pliers as the focal point. The ST11 has two main tools that share the spotlight, a pair of pliers and a pair of scissors. The tool opens the butterfly style but in opposite directions. Open one way and you get pliers similar to what is on the Skeletool. The pliers are light duty and good for small things that may come up during your day. They have wire cutters as well which work good on copper wire and small steel wire. The casting seems decent and should handle some use without breakage. 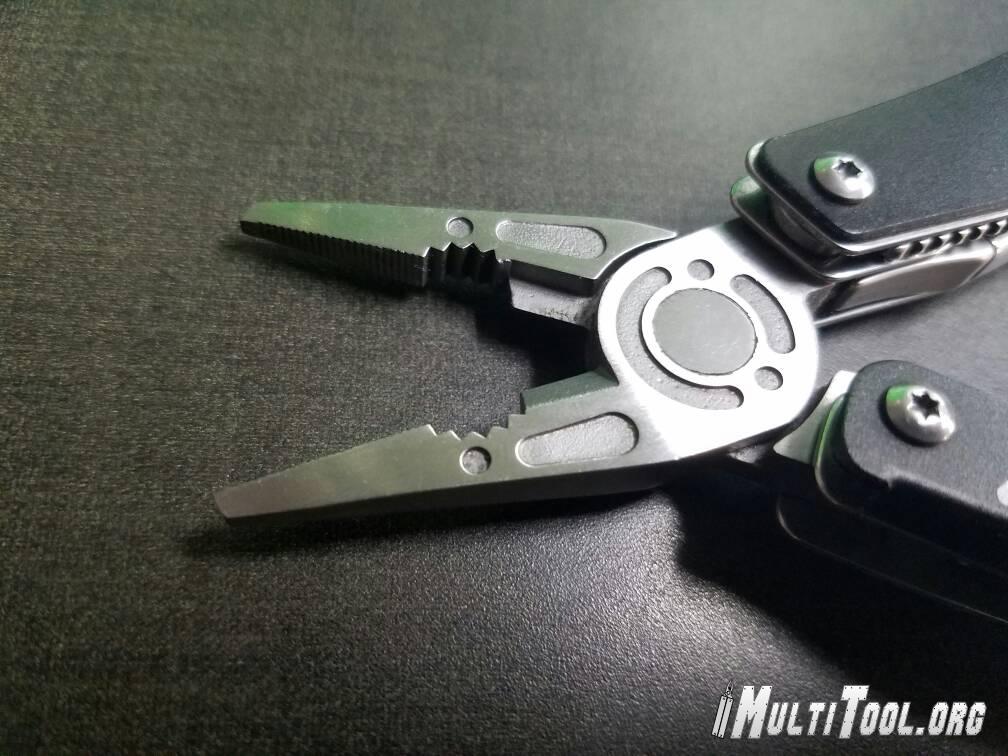 Opening the tool in the other direction your greeted with a very large pair of scissors. The scissors are spring loaded as well as the pliers and make for some easy one hand action. There are a few multitools on the market that features scissors as the focus instead of pliers and its nice to see a combination of both. The scissors are extremely precise and I've used them to cut everything from paper to fabrics. I'm really impressed by these and wish more manufacturers would incorporate larger scissors into their tools. 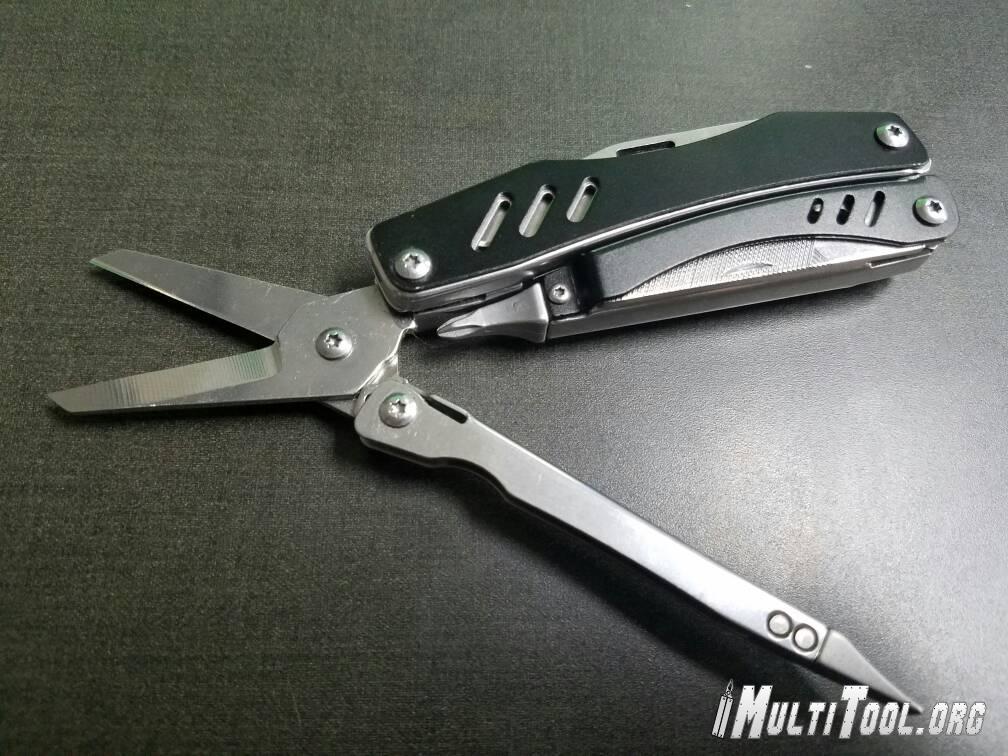 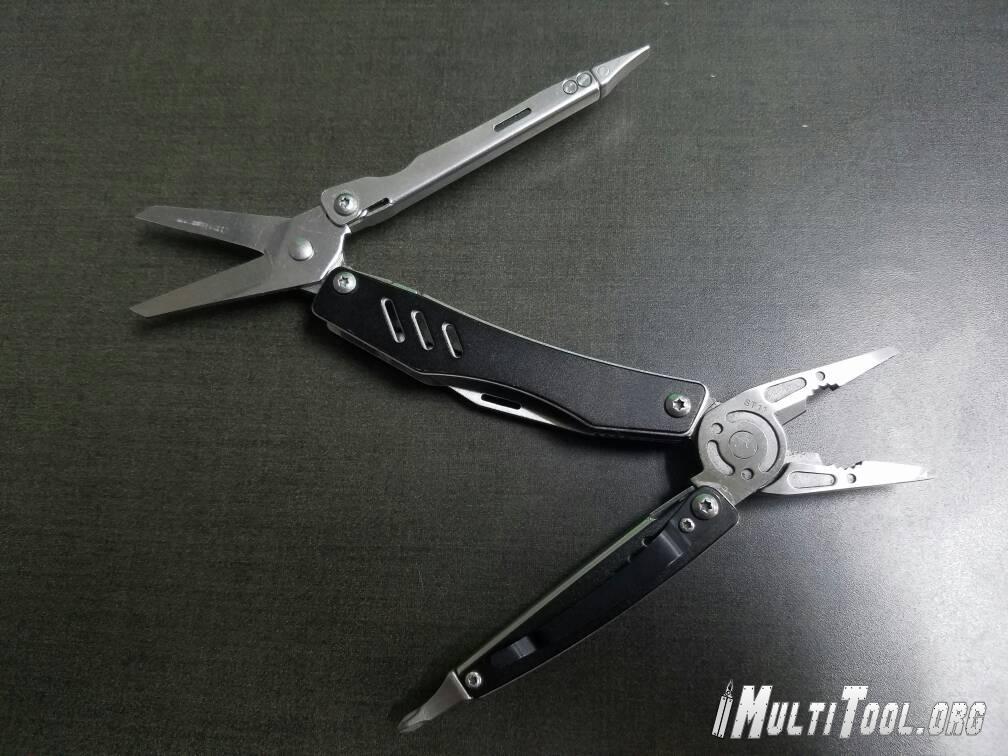 The ST11 features both a phillips as well as as flat driver. Both drivers are not like a standard tool where they are folded into the tool but rather they are fixed to tools handles. They appear to be cast like the pliers are and are not very crisp in form. The phillips is more of a #1 style and could benefit from being a #1&2 hybrid, making for more heads it can turn. The flat is ok for most heads and the handles on both drivers flex a little when being used.  These drivers work well in a pinch but due to their cast nature along with position on the tool I don't see them handing a lot of torque. 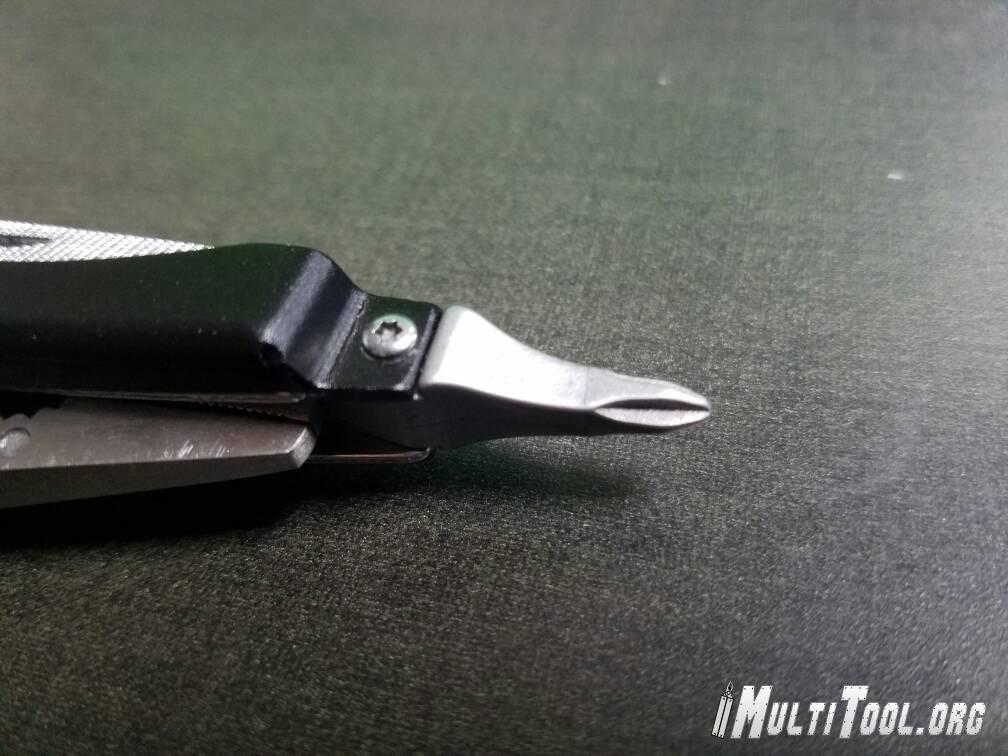 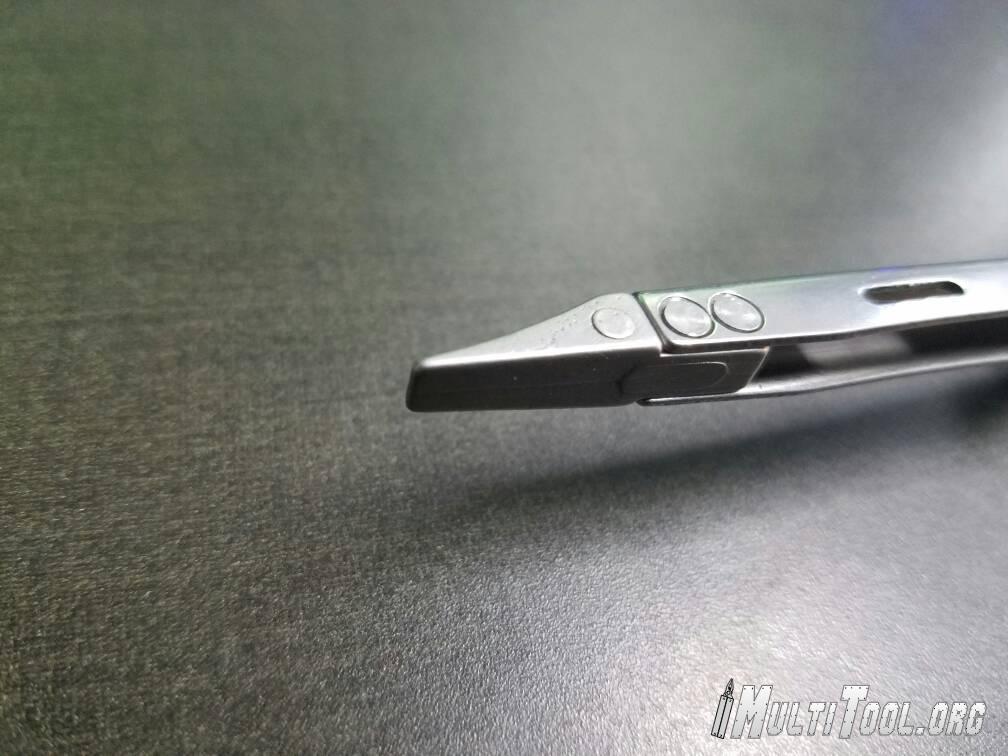 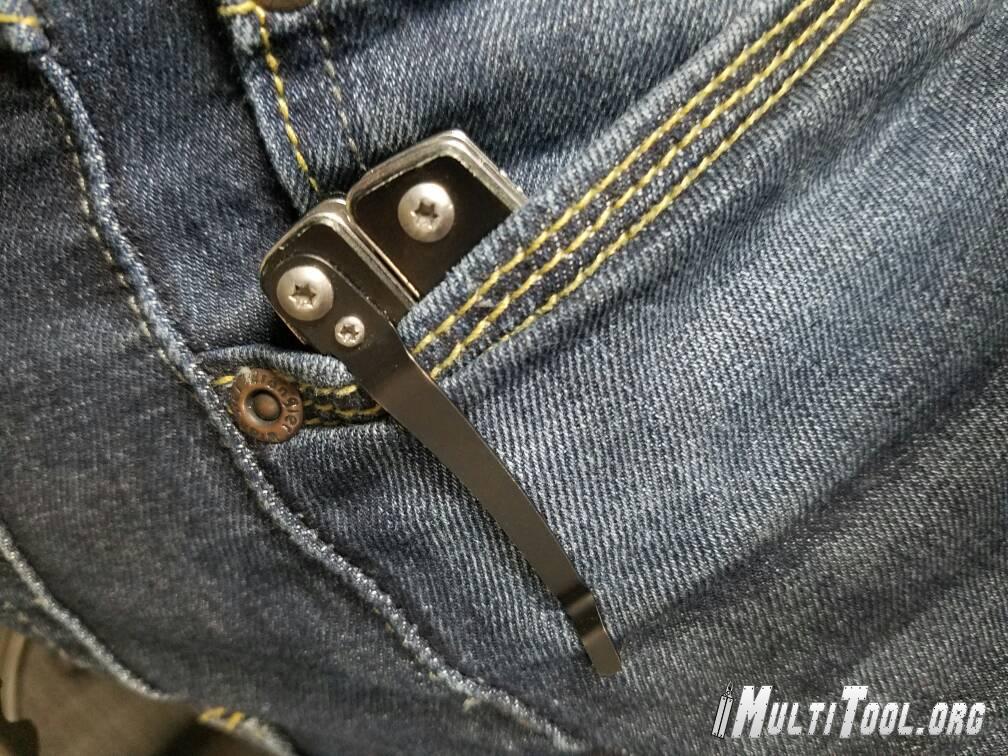 Overall I love the new design of the ST11, it's not without its faults but I'm glad to see someone thinking outside the box. I like the fact the tool has a pocket clip attached, nice to have another method of carry besides my belt. The ST11 makes a good light duty tool and handle simple jobs with ease. I would like to see an updated verizon of this in the future that could fix some of my minor complaints. If your looking for a light duty tool that's definitely different than the competition check this tool out.