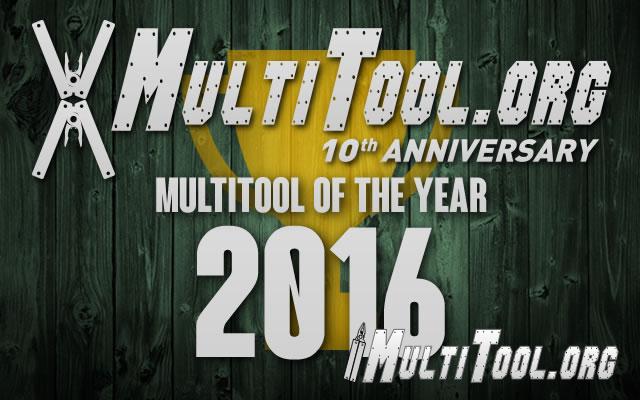 It is that time again- time to have your say and make your voice heard! I know many of the readers out there may be sick of voting by now, but trust me, this time it's something important!  It's the Official 2016 Multitool.org Multitool Of The Year Award, and we want you to help us choose the winner!

Every year we vote on the Multitool.org Multitool Of The Year by selecting all of the tools that were released in 2016 and getting you, the multitool users to decide which one you like best- or in this case, ones because you are allowed up to three votes which means you don't have to pick one or another! That is after all the MTO way!

Voting will be open until December 27th, just in case Santa delivers you a little something that changes your opinions, and we will announce the winner on December 28th.

Every year we have folks try to come up with a criteria of what constitutes the “best” multitool so that voting can be seen as impartial, but in the end I don't believe people should be told what to vote for, which is why you get multiple votes. “Best” could mean the one you like the most, it could mean which one is the best bang for the buck, it could mean whatever you prefer to carry and use the most- it's wide open for you to determine which tool you feel has earned the title BEST MULTITOOL OF 2016!

In case you aren't familiar with some/all of the tools, here are a few links to get you up to date:

So that's it- as usual if you have any questions, feel free to ask them on our forum or send me an email at This email address is being protected from spambots. You need JavaScript enabled to view it. and I'll get back to you as soon as possible!

What was your favourite multitool released in 2016?